The bridge across the river Jølstra was named after the shopkeeper Hans Christian Fr. Lange, one of the people who took the initiative to build the first bridge. The bridge has always been an important communications link in Førde town. 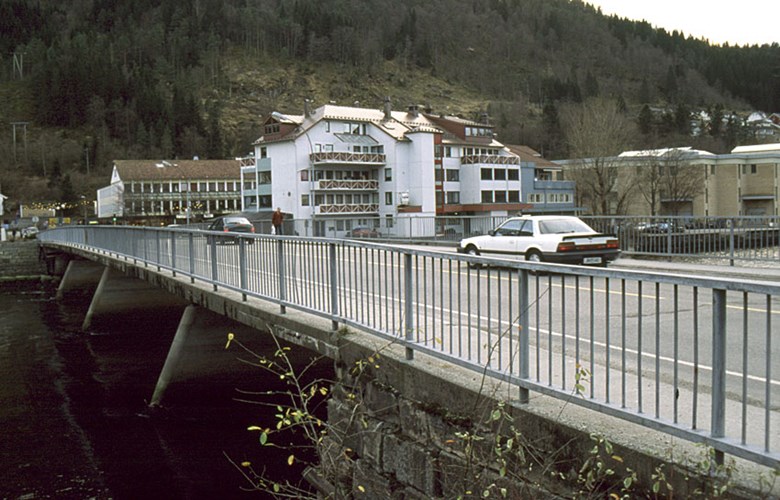 A quiet day at Langebrua in the autumn of 2001. In the background can be seen the shops and office buildings on the south side of the river Jølstra.

Building of bridges in the 1830s

In 1833 the bailiff Johannes Falch (1792-1855) and the shopkeeper Hans Christian Fr. Lange took the initiative to build a bridge across the river Jølstra between Hafstad and Skorpa in Førde. The location of the bridge was decided by the Public Roads inspector Meidell. Lange was the first to keep shop at Skorpa (where Sivertsens Hotell was built later, today Domus), starting up around 1830. He was obviously interested in a better connection across the river. On the banks of the Jølstra there were many boat-houses and sheds, and twelve farmers upstream were compensated because the bridge obstructed boat traffic for them.

The bridge was probably built a short time after 1833. The first bridge was in wood, with foundations in the river. They were three-cornered, with one point against the stream, built with logs, and filled with stone. This type of bridge foundations, later only laid in stone, can still be seen under bridges on the Den Trondhjemske Postvei (The Royal Postal Road). At this time Anders Olson Hafstad was the ferryman. The boat trip across the river had not been free of charge, so a bridge toll was collected. The two bridge builders in 1838 tried to persuade the municipality to take over the bridge, but only in the 1850s did the municipality become interested in the installation. In 1838, the bridge was called "Førde Bro (Førde Bridge)". The name "Langebrua (the Lange Bridge)" came later.

Bridges taken down by drifting ice

During the winter of 1851 the bridge was torn down by drifting ice in the river. Only in 1856 did the municipality decide to rebuild. The bailiff Falch had then passed away, and the shopkeeper Lange had left the community. In 1856, financial support was given by the county and the neighbouring municipality of Gaular, and the bridge became a public project. In 1873, the bridge was partly destroyed by an unusually heavy flood. A new and reinforced bridge was put up in 1874. This bridge managed well until February 1922. Then it was cut in half by heavy drifting ice in the river. A makeshift bridge was in service until a new bridge was opened in 1925. This bridge was built with strong iron constructions, and was expected to cope with the ice in the Jølstra. So it did, but as time went by, it had to surrender to a growing motorized traffic. 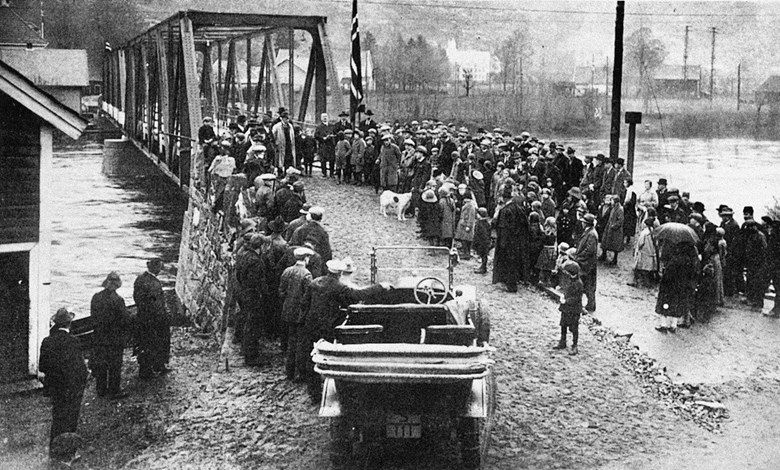 Langebrua in the communication picture

After the wharf was established at Steinen in 1858, the traffic on the road out there increased, and Langebrua rose in importance. At the south end of the bridge the first built-up area grew up throughout the 1900s. In consequence the bridge became steadily more of a pivot, linking the new with the old Førde around Sjøahola, the church, and Skorpa.

The existing Langebrua has survived through the growth period into modern Førde. It was built in 1959, 75.91 metres long, 11.32 metres wide, and it is built with four spans, the longest being 21.22 metres. Maximum permitted weight of a single vehicle is 42 tonnes. While the bridge was a part of the state road through Førde, it was the responsibility of Statens vegvesen (The Public Roads Administration), but it is once again municipal property. 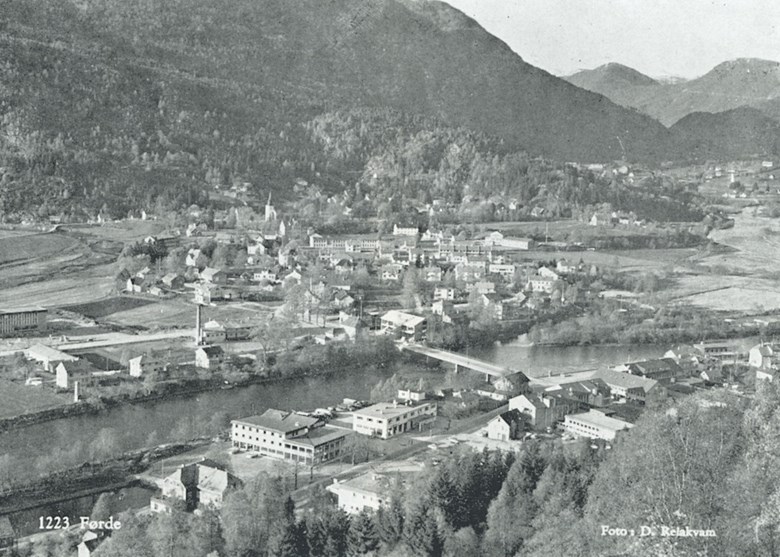 After the flood in 1922 only remnants of Langebrua were left. Two women were on the bridge when the flood tore it down, Hansine Bruland and Johanna Hornnes Fauske. Both survived the calamity.
Owner: Sunnfjord Museum. - Date: 1922. - Photographer: O. Fauske.
Sunnfjord Museum.
1922.
O. Fauske.

The opening of the new bridge after the flood damages in 1922. The man to the left of the flag is the mayor Olai Tefre, and to his left, the chief road administrator Wåge.
Owner: Sunnfjord Museum. - Date: 1925. - Photographer: O. Fauske.
Sunnfjord Museum.
1925.
O. Fauske.