Anchor at Værlandet - memorial of shipwreck

In the night of 30 December 1919, the SS "Orm Jarl" ran aground to the west of Alden. Two salvage vessels arrived at the disabled ship, and for some time it looked as if the ship could be salvaged. But wind and heavy sea wrought such damage that the hull broke in two and sank. Some of the cargo and other things onboard were salvaged, including an anchor. This is now located at the ferry quay at Værlandet, in memory of the shipwreck. 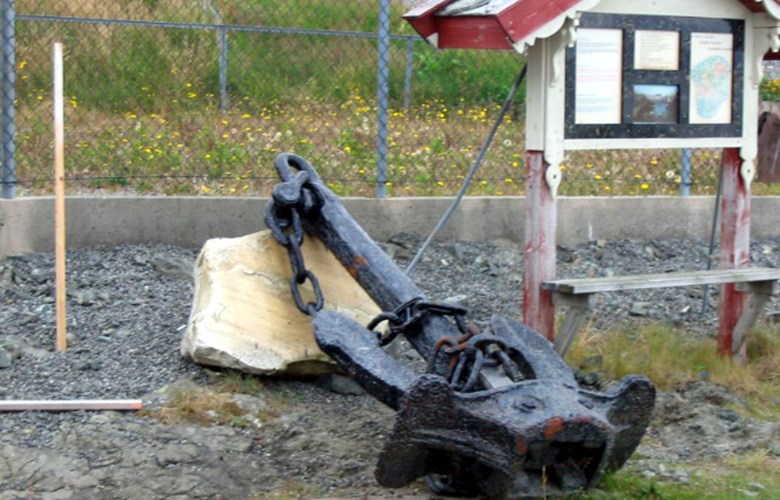 Anchor of the "Orm Jarl" at the ferry quay at Værlandet.

In the news the same day

"The Nordenfjeldske's (steamship company)"Orm Jarl" last night ran aground at Alden. The coastal steamer "Neptun", which was at the scene around 7 o'clock, approached the ship but did not try to salvage. The "Orm Jarl" was grounded close to land, but it is not vulnerable in the present weather (wind from the south).
The salvage vessel "Brat" left this morning headed for the wreck."

In the balance one week later

The same newspaper four days later reported that the ship was standing on the shallows up to mid-ship. The salvage vessels "Achilles" and "Herkules" of Norsk Bjergnings-Kompagni (salvage company) had arrived and had worked with the boat, but had been forced to stop the work due to bad weather. The salvage vessels and the crew of the "Orm Jarl" had gone east to the island of Hindøya. The disabled ship was vulnerable, and everything now hung in the balance.

It went wrong. Wind and foul weather from the northwest and the north in January of 1920 played havoc with the ship. On 8 January, the newspaper Fjordenes Blad at Nordfjordeid reported that the ship was full of water, the stem hold excepted. It was feared that the ship would become a total loss. And a short time later, the Nordre Bergenhus Amtstidende in Florø could report that the ship had broken in two, and that the salvage company had given up.

Malvin Toft has written about the shipwreck in his book Havet tok (the sea took), and he has used the maritime accident inquiry as one of his sources. He writes that the "Orm Jarl" ran aground on 30 December, a short time after 02.00 am. The captain immediately ordered the lifeboats out ready for use. Attempts to pull the ship loose on its own engine were useless. Around 03.30 one of the pilots, the mate, and four of the crew entered a lifeboat to report and call for assistance. It took them five hours to get east to Værlandet, and they were back around noon.

It all looked quite promising, Malvin Toft writes, but then the weather worsened considerably, and the salvage work had to be stopped. Fortunately no lives were lost.

They succeeded in salvaging some of the valuable pyrite and some of the other cargo onboard as well. A local newspaper reported on 31 January, with the newspaper Bergens Aftenblad as the source, that an assessment was carried out in Bergen of the following commodities:

483 cases of tinned products were reduced to half value, 10 bags of herring meal were in such "bad condition" that the contents should speedily be sold off as fertilizer, a quantity of stockfish was unharmed, three cases of knitwear had some damage, while two cases of shoes were as good as new.

The SS "Orm Jarl" belonged to the shipping company Det Nordenfjeldske Dampskibsselskab (NFDS), whose main office was in Trondheim. The Nordenfjeldske had been established in 1857, and it ran a coastal steamer service, being a participant in the Hurtigruta (passenger and cargo service between Bergen and Kirkenes). In 1940, the Nordenfjeldske had 25 ships, half of which were lost during the war.

The SS "Orm Jarl" (earlier the "Hamburg") was built for a Swedish shipping company in 1888 by William Daxford & Sons, Sunderland, England. The ship was 799 gross register tonnes and was named the "Hamburg". The Nordenfjeldske bought the ship on 12 February 1913 for NOK 125,000. The "Orm Jarl" ran aground on 30 December 1919 and was a total loss.

The title of jarl is the same as the English earl and originally meant chieftain, nobleman. In the Elder Edda (collection of Old Norse poems) "jarl" is used for a man of noble family, but later it was used as the title of a governor of a large area. The title jarl was most often used for the most important officials of the king.