The author Kristian Elster the Younger

Kristian Elster the Younger (1881-1947) had deep roots in the upper public officials circle in Førde. Evidence of this can be found in his writings. Apart from this, Elster was best known in his own time as a writer of literature reviews, with the capital of Oslo as his base. 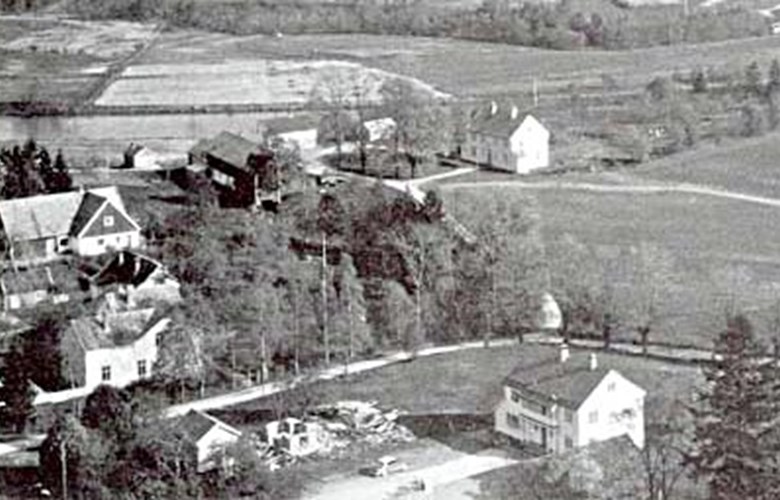 The yard at Førde vicarage with the big residence, built in 1924, to the right, and the other houses around the yard, the barn to the left. To the far left there is a glimpse of the bailiff farm of Volden.

Kristian Elster was born on 17 March, 1881 in Trondheim. His parents were author and forester Kristian Elster the Elder (1841-1881), who died a short time after his son was born, and Sanna Fasting (1845-1926). Soon after her husband died, she moved with her three sons to her home town of Førde, where her father was vicar and her father-in-law was bailiff. She was very fond of telling stories, and she was the life and soul of the family. O. W. Fasting, known for his stories from the district around Førde, was her brother.

Elster grew up in Førde, and later spent many of his holidays there. The scenery in Sunnfjord and his social surroundings there are frequent themes in his writings. The family moved to Kristiania when he was seven. He studied law and had his degree in 1905. In 1905-1907 he worked as a bailiff's assistant in Mandal, after this in the Ministry of Agriculture until 1918. In 1920, he married Ragnhild Poulsen (1885-1958). One of his sons was the author Torolf Elster (born 1911). Kristian Elster died on 6 November, 1947 in Oslo.

Elster's first book "Fortellinger (stories)" was published in 1907. From 1911 he wrote reviews of dramas and other types of literature for newspapers, and was able to work as a full-time writer from 1919 for the newspapers Aftenposten and Nationen. Philip Houm has said that a book review by Elster could well decide the fate of the book, "and often did".

He wrote in all 20 novels and three collections of stories, four plays, and one collection of poems. Although his work was done in the capital, it is believed that he emotionally never really settled down in the city. But he had strong links to his childhood home in Førde. And in his books there is a shift in background between the capital and Førde, where the public officials circle is at the centre. One of his themes was the social fall of this class in modern society. This is well described in one of his novels "Av Skyggenes Slekt (descendants of the shadows)" (1919). This book is possibly his main work. Here are subtle and beautiful descriptions of nature, such as this:
"At long last it had begun to rain. It had started as a delicate, dense rain, with glimpses of sunshine in between. Then the mountains collected it, and now pouring rain sank across the green fields, and the birches bent and emitted scent in the moisture. And the brooks grew and whistled. And Prestegårdsgroven as always ran at high speed, full of water." Rain described so positively and beautifully is rare in literature.

Elster loved to tell stories. The novel "Min bror Harris (my brother Harris)" from 1917 is regarded as his breakthrough as a writer. Elster's writing of reviews of literature and drama in newspapers and other publications was comprehensive. So was the great work in two volumes "Illustrert Norsk litteraturhistorie (illustrated Norwegian history of literature)", which he wrote in two years in the 1920s. 1400 pages in two years was inhumanly hard work, and his health was badly shaken. The two authors, father and son Elster, have a street in Førde named after them, Elstervegen at Prestebøen.

Kristian Elster the Younger's son, Torolf, is a well-known author of crime stories. Yet he is best known as the director of NRK (Norwegian Broadcasting Corporation) from 1972 to 1981.
Owner: Aftenposten. - Date: 1990-åra. - Photographer: Ukjend.
Aftenposten.
1990-åra.
Ukjend.
resources: