The lookout point and the adjacent car park of Stegastein are located on the old mountain road between Aurland and Lærdal - county road 243 - has been included in the national tourist road project of the Norwegian Public Roads Administration. The lookout point received the award for the year's best construction project at the "Byggegallaen" in 2006. 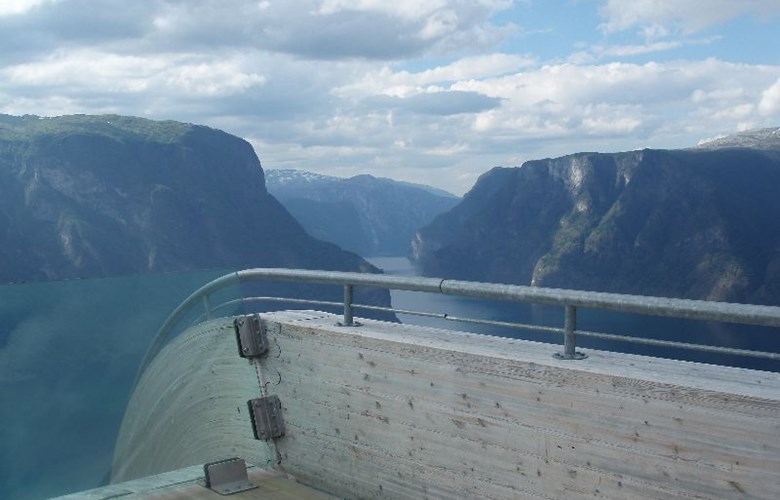 From Stegastein visitors have a spectacular view of the narrow Aurlandsfjord and the mountains lining the fjord.

The old Aurland road is an alternative itinerary between Aurland and Lærdal for those who prefer to experience a spectacular countryside and interesting culture on their way. This mountain crossing is about 50 kilometres long (about 30 miles) with its highest point at the lake of Hornsvatnet at 1306 metres above sea level. The first stretches of this road were originally private farm roads, first to the high farm of Kvigno at Erdal (on the Lærdal side) in 1912. The two brothers who established the Kvikne's Hotel in Balestrand came from this farm. Even if they had started a new life at Balestrand, they had never forgotten the hard work on their home farm. Consequently, they gave their nephew who was still running the farm money to build a road. Only 50 years later was a road built from the village centre of Aurlandsvangen up to the farm of Bjørgo on the Aurland side. The same year as the road to Bjørgo was completed, the municipal authorities decided to continue the road across the mountains to Lærdal. This mountain road was opened for traffic in 1967.

The Norwegian parliament - "Stortinget" - and the Ministry of Transport and Communications have decided to develop 18 national tourist roads by 2015. This development of tourist roads is organized by the Norwegian Public Roads Administration through the nationwide Tourist Road Project. The common denominator for the selected roads is that they are all located in a beautiful natural setting as well as blending harmoniously into the landscape. The aim of the project is that the road itself can function as a tourist destination in its own right and at the same time be a top-quality tourist facility. The Aurland road will be conferred status as a National Tourist Road from 2008. The lookout point and the car park at Stegastein represent the first completed facility on the future tourist road.

At the lookout point a four-metre-wide platform of steel and laminated pine has been constructed. The ramp juts out 30 metres in the steep terrain, giving an optical illusion of being suspended in mid-air. At the very end of the platform there is a Plexiglas barrier providing an exceptionally stunning view of the terrain below. In addition, the facility consists of a car park and a toilet. The lookout point structure was designed by the renowned architects Todd Saunders and Tommie Wilhelmsen, and it has been highly acclaimed both nationally and internationally. In June 2006 the lookout point was officially opened by the Minister for Transport and Communications, Mrs Liv Signe Navarsete. In the same year the Stegastein Lookout Point was awarded the year's best structure in competition with buildings and constructions from the whole country. This is one of the construction industry's most prestigious awards, with the award ceremony taking place at the annual "ByggeGallaen".

From Stegastein there is a commanding view down to the small town of Aurlandsvangen and the Aurlandsfjord, as well as to the mountains of Flenjahornet and Flenjaeggi separating the valley of Undredalen from the inner part of the Aurlandsfjord. Through this mountain area the Flenja tunnel links the two villages of Flåm and Langhuso in Undredal. In the opposite direction of the view down to the fjord there is a well-managed cultural landscape consisting of barns, stonewalls and hay fields. This landscape forms a transition zone to the mountain farms and the alpine landscape that meet tourists venturing further up along the Aurland road.

About 600 metres above the Aurlandsfjord the outlook point of Stegastein looks like a gigantic diving board hanging in mid-air. The simple and organic structure blends nicely with its natural surroundings. During the construction of the platform not a single pine tree had to be cut down.
Owner: Trude Knutzen - Date: 09.08.07 - Photographer: Trude Knutzen
Trude Knutzen
09.08.07
Trude Knutzen

Overwhelmed by the excellent view, someone has left behind a pair of shoes at one of the many small cairns along the road. In the background we can see the mountain farm of Vardahaug by the road leading down towards Lærdal.
Owner: Trude Knutzen - Date: 09.08.07 - Photographer: Trude Knutzen
Trude Knutzen
09.08.07
Trude Knutzen
resources:
Thyri, Hans H.: Aurlandsvegen. Skald AS 2006