"Bread of stone and spirit of 'Striile' (local people), Dahl forced at Eivindvik". These are the frequently quoted words by Henrik Wergeland about the vicar Niels Griis Alstrup Dahl in his poem Eivindvig. They testify to a vicar who was concerned both with the material and spiritual aspects of life. He died in 1852 and was buried at Gulen church. In 2002 - 150 years later - the people of Gulen erected a memorial stone for Dahl. 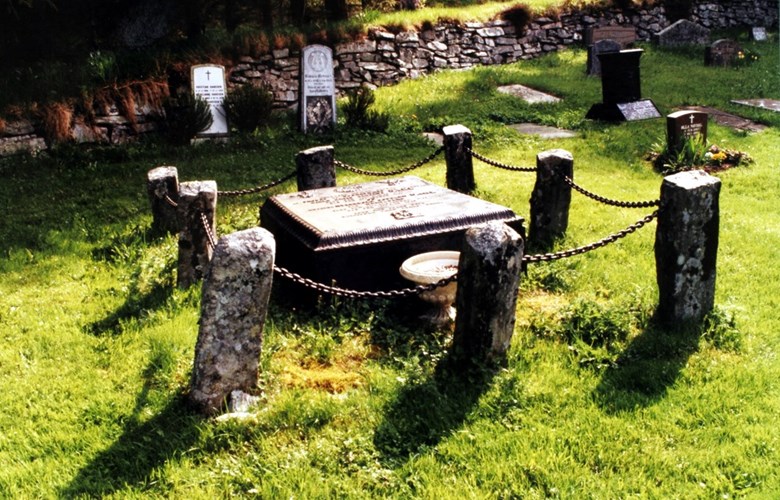 "PEACE BE WITH YOUR DUST * BLESSED BE YOUR MEMORY" are the words written on the grave memorial of Niels Griis Alstrup Dahl and his wife Hylleborg, née Hertzberg. The grave lies to the north of the church at Eivindvik.

Aud Randal wrote a Master's thesis on Niels Griis Alstrup Dahl in 1995. Randal also wrote a biography for "Norsk biografisk leksikon", Vol. 2, 2000. The whole biography follows after the story of the memorial stone.

The memorial stone for Niels Dahl is located at Eivindvik in front of "Herresalen", the residence that Dahl built and which later was used as municipal offices. At the front there is a portrait relief in bronze with the inscription: EIVINDVIGENS * ANDEN SKABER (the second creator of Eivindvik)

On a bronze plaque at the back is written: Erected with collected means from the people * and contributions from businesses and organizations in and * outside the municipality of Gulen. * Unveiled 18.8.2002.

The work of erecting the memorial stone

It was the former bank manager and local historian Magnor Midtun who took the initiative to raise a memorial for Niels Griis Alstrup Dahl. He wrote a letter to the municipal authorities of Gulen, asking them to start working with erecting a memorial stone for "the second creator of Eivindvik". Shortly afterwards a work group of three persons was appointed: Magnor Midtun (Gulen sokneråd), Aage Sandal (Eivindvik Ungdomslag) and Svanhild Røkenes (later Øyvind Norstrøm) representing the municipality.

The work group took care of all the organization; they got the press interested in the project, raised the necessary means - about 100 000 kroner - , hired the artist Elisabeth Steen, got hold of a suitable stone from Henriksbø, and planned the unveiling ceremony. Everything was taken care of in a matter of three years. 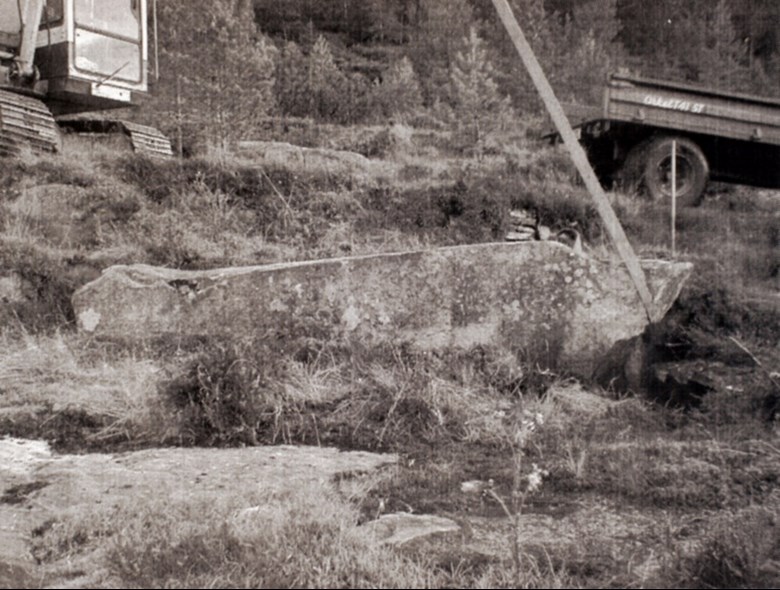 The unveiling ceremony on Sunday 18 August 2002 was the highlight of the annual "Dahl days" at Eivindvik. Magnor Midtun gave the unveiling speech and unveiled the stone. Midtun tends to express himself in poetry on special occasions, and his unveiling speech is no exception as it contains 40 stanzas. The speaker gave an account of the life story of "The second creator of Eivindvik". The audience heard about the housewife Hylleborg's efforts in the vicarage and the many roles played by Dahl: the clergyman, the farmer, the road builder, the health pioneer, the teetotaller, the public educator, the schoolman, the historian, the writer and the mayor. After the last stanza, the stone was unveiled with the following words (freely translated):

Today we with happiness and great respect
unveil the stone as a gift from us all
to all future Gulen generations
accept this monument - let the curtain fall.

In her speech, mayor Trude Brosvik expressed her gratitude to everybody who had contributed to erecting the memorial stone. She gave special mention to the driving force Magnor Midtun and the artist Elisabeth Steen. 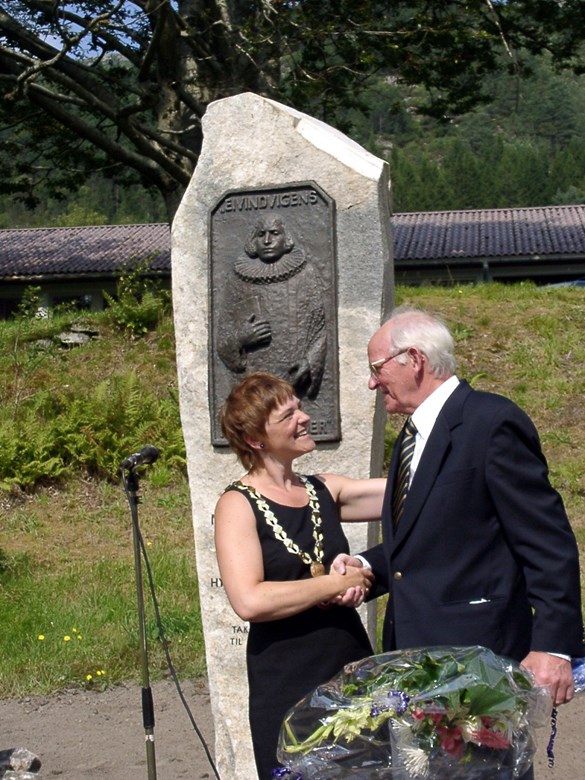 The Dahl picture could not be used

The artist was supposed to have used a Dahl picture that had been hanging in the mayors' gallery in the municipal meeting hall for many years, but it was revealed that the well-known portrait of Niels Dahl was not the correct Dahl as it shows his namesake. People had lived in good faith. Ivar Kleiva has even an interpretation of the picture in the article he wrote on Dahl in the local history book published in 1975: "..in this face we see two strong, intelligent eyes with a strange light in them, revealing the fire and power that lived in this frail body."

This picture has been used in many books with information that this is the famous vicar from Eivindvik. After the error had been revealed, the artist had to make a completely neutral vicar's portrait on the relief.

Niels Griis Alstrup Dahl was a well-known public servant and public educator in the first half of the 19th century. His efforts in the Eivindvik parish were legendary, and were important both to his contemporaries and future generations.

He grew up at Kapteinsgarden in Uskedalen as the second oldest of twelve siblings. The family owned extensive land properties at Kvinnherad and were wealthy. He attended Katedralskulen in Bergen, became a student and got a degree in theology from the University of Copenhagen in 1800.

For the next few years he was an assistant to the famous vicar and public educator Niels Hertzberg at Kvinnherad. These years undoubtedly played an important role for his own development and later interests and activities. In 1804, he was appointed curate in Eivindvik parish, and in 1807 vicar. From 1823 to 1847 he also served as dean of Ytre Sogn. 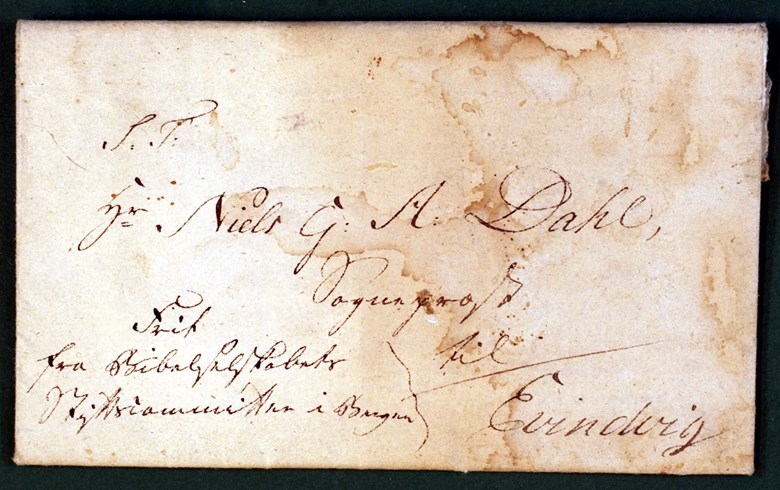 Agriculture was close to his heart. In order to show the farmers good agricultural methods, he turned at his own expense the small vicarage into an outstanding model farm. According to bishop J. Neumann, Dahl had "defied nature" with his cultivation work. At the same time, he organized what was perhaps the best reallocation of land system in the west of Norway at that time. From 1817 to 1840, about 200 farms were reallocated from the old strip cultivation. Consequently, every farmer in the Eivindvik main "sokn" (sub-parish) - and a few outside - now had all their land in one field, and, encouraged by Dahl, started cultivating their fields and put up stonewalls around their farms and moved their houses from the cluster farmyard. This meant that the crop was soon doubled on many farms. He also got the farmers to build more maintenance-free houses where stones were used for outhouses and foundation walls.

Another matter close to his heart was the public school. He taught and trained teacher candidates himself in the vicarage where they stayed for free. For some of these he even paid for further education elsewhere. In 1820, dean Normann wrote that "in no other parish (in Sogn) did they have so many competent teachers as at Eivindvik". Dahl established two permanent schools as early as in 1825. This was many years before it had become common practice to have permanent schools in the rural areas. In 1829, he also established a public library. He was very much interested in history, and he wrote several articles on historical subjects, for example on the two ancient stone crosses at the church at Eivindvik.

It also has to be said that he from 1806 to 1908 personally vaccinated the about 3500 inhabitants in the parish against smallpox. This was a major effort which gave a good result, because when a smallpox epidemic struck in the area some years later, there were only two cases of mild smallpox at Eivindvik. On Dahl's initiative, a midwife was employed in the district in 1828.

In all this work, he did not in any way neglect his duties as vicar in this extensive parish. He was a good spiritual father, gave edifying sermons and was an excellent catechist.

In the autumn of 1814, he represented the old county of Nordre Bergenhus amt (the present Sogn og Fjordane) at Stortinget (Parliament). There he made his mark as the only person from the rural areas who voted against the union with Sweden. He also sat at Stortinget in 1827, 1828, and 1830. From 1837 to 1847 he was mayor of Gulen, and he was also a highly regarded leader of the conciliation board.

For his outstanding civic services in the Eivindvik parish he was awarded the medal Borgerdådsmedaljen in 1825, and he became a member of the Royal Norwegian Society of Sciences and Letters in 1829.

Dahl spent his entire fortune on beneficial initiatives in the parish, and he did so with pleasure. In this parish he had felt at home from the very first day, and knew very quickly that this was where he wanted to stay and spend his life for the benefit of the people. He and his wife lived a simple life at the vicarage. They had no children of their own, but they brought up many children. In the last ten years of his life, his health was poor, and there are clear indications that the many efforts and initiatives had broken him down physically. He died at the vicarage and is buried at Gulen church at Eivindvik.

In the poem Eivindvig (1833) Henrik Wergeland wrote a beautiful tribute to Dahl:
"Bread of stone, spirit of 'Striile' (local people), Dahl forced at Eivindvik", but we cannot be sure that the local people were flattered by the "spiritualization"

Note: "the small vicarage" referred to above is perhaps misleading. Vicarages were usually among the best farms. It would be more correct to say that the vicarage at Eivindvik was neglected and not properly maintained when Dahl took over. (Magnor Midtun.)