On the northern side of the church at Aurlandsvangen there is a stone linked to a prehistoric find of a grave at the farm Skaim. The stone has been erected in recent years, but we have not succeeded in establishing exact information when the stone was erected or why it was done. Nor do we know who did it. 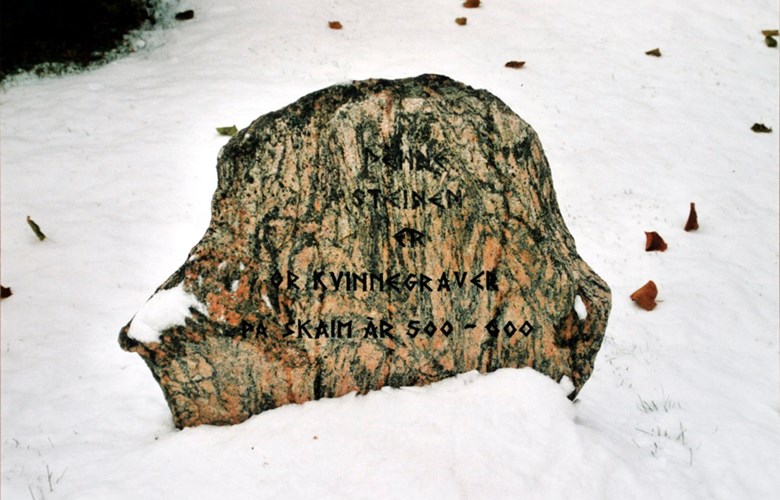 The memorial stone at the Vangen churchyard for the grave find at Skaim.

The inscription
The stone has an inscription on both sides. At the front the inscription says:
DENNE * STEINEN * ER * OR KVINNEGRAVER * PÅ SKAIM ÅR 500 - 600
(THIS STONE IS TAKEN FROM WOMEN'S GRAVES AT SKAIM 500 - 600AD) At the back:
FRÅ AURLAND MUSIKKLAG

Stone slab from Skaim
In 1964 an archaeological excavation was carried out in a rock mound at Skaim. It turned out that there were two graves under the mound; both of them were women's graves. The oldest one, dating from the Age of Migration (400-550AD), was covered with some big slabs and contained a woman's grave. One of the slabs was taken care of and erected at the churchyard. The inscription at the back of the stone indicates that it was the Aurland Music Band that covered the cost of the transport and the erection. 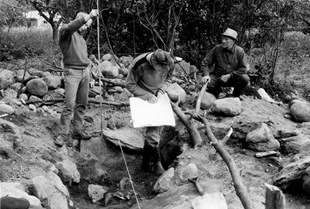 Read more about the women's graves and other prehistoric finds at Skaim in a separate article (see below).