The present main road between Oslo and Bergen follows more or less the same route as the old postal roads did. However, from Lærdal it no longer follows the fjord but cuts through the mountains in a series of long tunnels. A section of the old postal road along the Nærøyfjord is still intact. This road was mostly used in the winter months when ice covered the Nærøyfjord and it was hard to use a boat to and from Gudvangen. 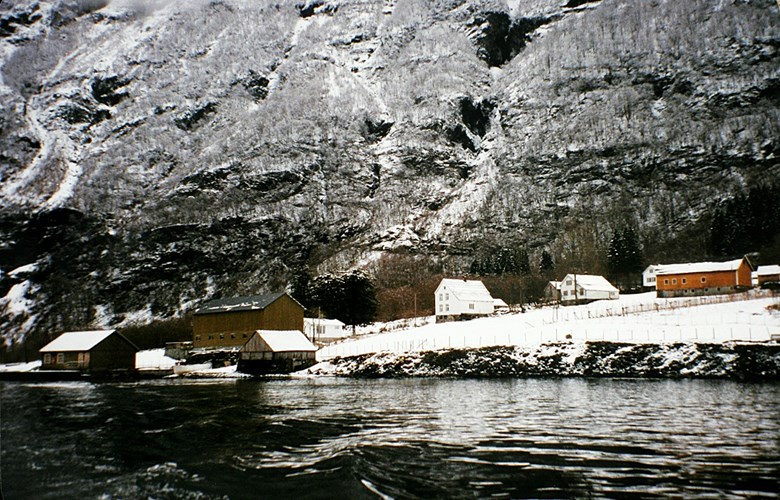 The old riding path in the Nærøyfjord started at the Styvi farm. Styvi had been a post station and postal farm for centuries. The farm has a number of residences and outbuildings, and the farm is still in operation. The place is said to have been settled since the Viking Age. In the Middle Ages there were three farms at Styvi, but after Black Death (1349) there have never been more than two farms. Down by the fjord is the smallest post office in the country, combined with a café and a farm museum. The museum was opened in 1993.

The old postal route normally went by boat between Lærdal and Gudvangen in the Nærøyfjord. Farmers had duties to transport the post and they rowed the postmen the long distance. However, from late autumn until April the fjord could be covered with ice. Then the post was rowed to Styvi and transported overland a five-kilometre-long path to "Bleiklindi" (the pale linden tree) where the fjord is at its narrowest. Then they crossed the fjord on the ice to Bakka and further in along another track to Gudvangen. This ice crossing was far from safe. This road section was so important for the transportation of post that about 1850, the idea was brought up to continue the road from "Bleiklindi" to Ramsøy and Gudvangen. In this way they could avoid the dangerous crossing on ice over to Bakka. The road section between "Bleiklindi" and Styvi was an important part of the postal road between Bergen and Oslo. 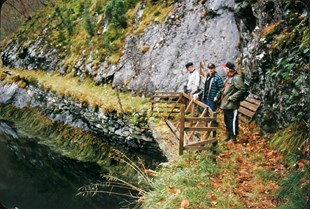 An ice boat was constructed

In the winter months it was often necessary to have a boat on the sledge in case it was possible to row. This was, of course, very cumbersome, and the "post farmers" at Nærøy therefore constructed a specialice boat, a combination of sledge and boat. It was a flat-bottomed rowboat with runners attached underneath. The boat was light but sturdy and on the ice it functioned as a sledge. No one knows when the first ice boat was constructed, but most likely it was some time in the 18th century. At the Fjord Museum at Kaupanger we find the last ice boat of this kind.

The road lies in a landscape protection area

The road between "Bleiklindi" and Styvi mostly follows the shoreline wherever possible. The road has beautiful stonewalls, culverts and ditches. At Galdene, just to the west of Styvi, a wooden bridge has been built along the steep mountainside to make it easier to pass. A little further west of Galdene, an iron railing has been put up above the road to provide support for hikers in icy conditions. On 18 October 1991, the road between Styvi and Holmo was established as a landscape protection area. Protection of the whole Nærøyfjord was then being planned as part of a national park, but when private plans of building an agricultural road from Styvi along the fjord was launched, the process of protecting the postal road between Styvi and "Bleiklindi" was speeded up. 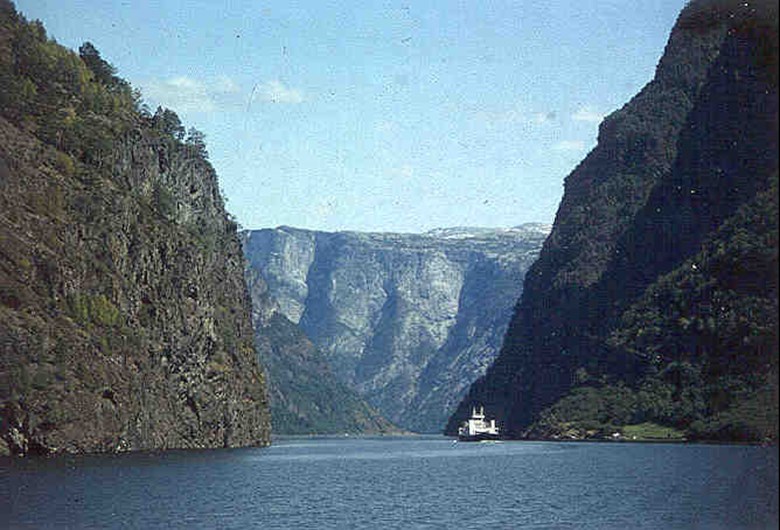 Road to Bakka, but not to Styvi

In the 19th century, work was started to upgrade the postal roads to improve the delivery of post. In 1854, a cart road was built between Gudvangen and Bakka. The road was merely 2.5 metres but was narrowed down to 1.9 metres where the terrain was most difficult. The road between Styvi and Bleiklindi never became anything but a trail for hikers and pack horses.

The Nærøyfjord is a protected area and has been inscribed on UNESCO's World Heritage List of the world's most unique natural and cultural monument sites. The Nærøyfjord is held to be among the most beautiful fjord landscapes in the world.
Owner: Statens vegvesen Region Vest, SFFf-100057.111986. - Date: 24.10.1995. - Photographer: Per Birger Lomheim.
Statens vegvesen Region Vest, SFFf-100057.111986.
24.10.1995.
Per Birger Lomheim.

Between Styvi and Odnes the mountainsides are fairly steep. Several places the road is exposed to avalanches. This risk is an integral part of the unique landscape along the Nærøyfjord.
Owner: Statens vegvesen Region Vest, SFFf-100057.111986 - Date: 24.10.1995 - Photographer: Per Birger Lomheim
Statens vegvesen Region Vest, SFFf-100057.111986
24.10.1995
Per Birger Lomheim

The road passes Holmo, a point jutting out into the Nærøyfjord. People settled down there a long time ago. Close to the fjord there is a burial mound from the Bronze Age. It is 20 metres long and 14 metres wide, with a height of about 2.5 metres. This burial mound is the first trace we have of human activity in this area. It is obvious that the stones from mound have been used to make foundation walls as we can find the same type of stones in the ruins of the farmhouses. The burial mound can be seen at the extreme left in the picture.
Owner: Statens vegvesen Region Vest, SFFf-100057.111987. - Date: 24.10.1995. - Photographer: Per Birger Lomheim.
Statens vegvesen Region Vest, SFFf-100057.111987.
24.10.1995.
Per Birger Lomheim.