In 1905, Norway became a free and independent state. The union with Sweden was dissolved by resolution in the Storting on 7 June. This article is about Gjert Holsen from Førde, who was a Member of the Storting in 1905. 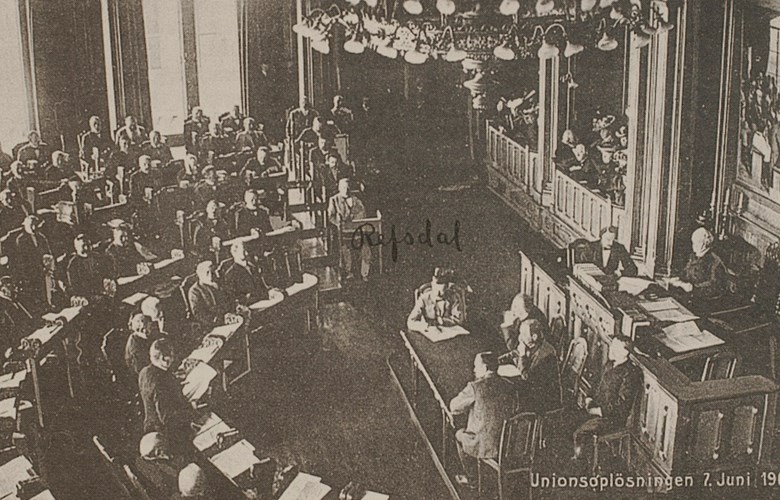 From the Storting on 7 June, 1905. Gjert Holsen was on sick leave. Anfin Refsdal from Vik substituted. On the original picture his son, Ivar Refsdal, wrote the name 'Refsdal'.

"Gjert Martinus Markvardson Holsen, born in the parish of Holsen in Førde, on 24 July, 1855, son of Markvard Danielson from Gjesdal in Jølster and Anne Gjertsdotter Holsen. Farmer at Holsen from 1882. Was elected to the Førde municipal council from 1887 to 1910, arbitration commissioner, etc.. Was Speaker of the Lagting (the smaller division of the Storting) 1905-1906, was a member of Specialkomiteen (the special committee) in 1905 and of the coronation deputation in 1906. Died on 22 June, 1921. Was married to Anne Holsen, daughter of farmer Søren Andreasson Holsen and Helga Rasmusdotter Hustetuft. 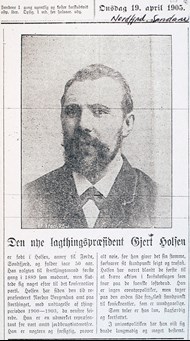 "He was elected to the Storting the first time in 1889 as a moderate, but some time afterwards joined the conservative party. (..) He is a splendid representative for the interests of the farmers in our county.
He is level-headed and thoughtful, weighs all questions carefully, before giving his vote, and defends his positions with perseverance and faith.

Holsen has been among the first to demand action in the consular case in answer to the Swedish breach of promise. He is no adventurer, yet he fearlessly takes a stand to consequences which are inevitable. br /> As a speaker he is good-natured, quick-witted, and to the point. In the union issue he has proved both patient and very decisive."

"Change of colour"
The newspaper Nordfjord referred to the fact that Holsen in 1889 was elected to the Storting as a "moderate", and that he later joined "the conservative party." The "moderate" party was founded after the liberal Left was split in 1888.
The local poet Andreas Korsvoll says about this change of party in the rhymed epistle "Tvo stortingsmenn" (two members of the Storting). The 4. and 5. stanzas rendered here in a free translation:

Gjert on the hill became well-known.
Was elected by the Left but changed colour
At the Storting he was among the conservative number
The staunch farmer from Holsadal.

In the conservative camp he was honoured
He was allowed to be Speaker of the Lagting
And that he got so high in life
Was definitely no shame for Holsen.

Speaker of the Lagting
The Lagting was according to old Norse constitutional law an assembly of men sent by a -"lagdøme", such as the Gulating, etc.. In the constitution of 1814, when law proposions were under scrutiny, one division of the Storting was called the "Lagting".
The Lagting consists of 1/4 of the members of the Storting. The Lagting deals with law propositions no less than three days after the Odelsting (3/4 of the whole Storting) has debated them.

Gjert Holsen was elected Speaker of the Lagting on 3 April, 1905, but for health reasons he was absent when the consular question was debated on 23 May and at the session of the whole Storting on 7 June, 1905. Anfin Refsdal from Vik substituted during Holsen's absence 12 May - 14 June.

Defended his vote for the Karlstad agreement
A great many people were of the opinion that Norway conceded too much during the Karstad negotiations about the dissolution of the union with Sweden, and that the Storting should have voted no to the agreement the negotiators reached.
All the representatives from the county of Sogn og Fjordane voted yes, and they were criticized for this by some. Holsen responded with a defense for his vote. Norway had won much more than the country had "lost" (the dismantling of the border fortifications).

In the newspaper Sogningen for 25 October there is this notice:
"Your pain [over the border fortifications] is shared by all the representatives [from Sogn og Fjordane]. But the pain must not be decisive - the whole situation must be considered. Are we humiliated, when the whole world recognizes us and praises our statesmen and our people? Should we push the question to its extreme, lose the sympathy of Europe and risk everything, our freedom, welfare, and everything we have gained during 90 years, in order to ease our immediate pain?"

'The new Speaker of the Lagting Gjert Holsen'. This picture was in the newspaper 'Nordfjord' on 19 April, 1905. Finn B. Førsund writes in his book on the history of Førde: '
In Høyres historie 1 (History of the conservative party, Volume 1) Holsen is regarded as one of the most prominent politicians in the so-called Vestlandshøyre'(conservatives of the West of the country) in the period 1900 to 1912. He is characterized as 'old-fashioned moderate, arch-individualist and advocate of low public spending, who was difficult to discipline into a single party.' He disagreed with the conservative party policy in the union question, threatened to oppose the party, and to decline re-election. The first threat was realized in 1909, the second in 1912'.