Cultural monument of the church site on the island of Silda

On the island of Silda there was a church from about 1320 to 1580. It was a chapel church in the parish of Selje. It was no longer in use after a new church was built at Nord-Vågsøy. Today the church site is marked with a cultural monument, and the place names of Kyrkjevågen, Kyrkjevågneset and Prestevika are present reminders of the Middle-Age church on Silda. 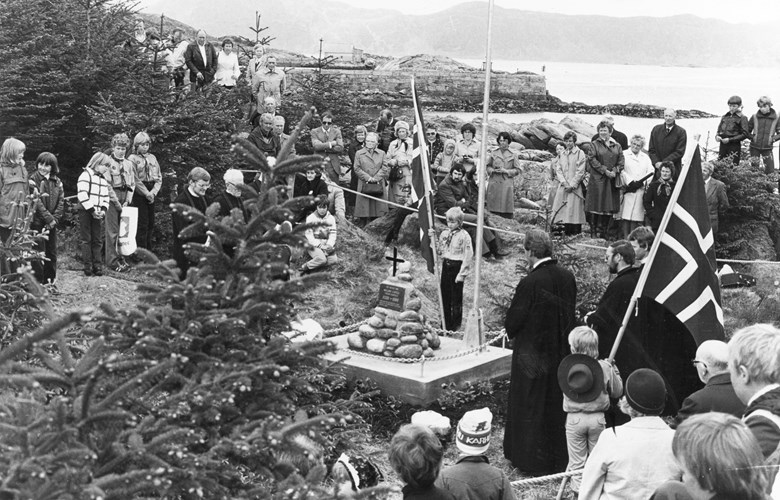 The church site at Alfarneset during the unveiling ceremony, Whitsun, 1980. Bishop Thor With officiated.

Church from the Middle Ages

The church on the island of Silda was located at the point of Alfarneset, on the east side of the bay called Kyrkjevågen. The churchyard was located slightly above the church. Here, on the southern side of Silda, the harbour was good, and seafarers frequently sought shelter there in bad weather conditions or when they were waiting for favourable wind to cross the exposed stretch of open sea at Stad further to the north.

There was a reference to the church on Silda in "Bjørgvin Kalvskinn", which is a survey of the churches in the Bjørgvin diocese recorded in 1340, but there may be grounds for thinking that the church existed as early as 1320. It was no longer used after 1580, when a new church was built at Nord-Vågsøy.

When the church was torn down, part of the timber is said to have been transported to Selje and used on the vicarage barn there. It is possible that the church bell was taken into use in the new church at Vågsøy. The stones in the foundation wall disappeared by and by, most likely used in foundation walls in other houses locally. This means that today there are no visible traces of the church site, but the place is marked by a monument.

In the Whitsun weekend in 1980, a monument was unveiled on the site where the church is said to have been located. The memorial is formed like a pyramid of stones, equal to the number of people who lived on the island of Silda in 1980. Bishop Thor With officiated at the unveiling ceremony. The memorial board has the following inscription: IN MEMORY OF * SELLØE CAPELL * (SILDA CHAPEL) * 1320-1580 * WHICH WAS LOCATED HERE AT ALFARNESET * ERECTED BY THE PEOPLE OF SILDA * WHITSUN 1980