The Ytterøyane lighthouse, the biggest in Sunnfjord, was built in 1881, and has withstood hurricanes and airplane attacks. This lighthouse is one of very few along the coast that has not yet become automated. 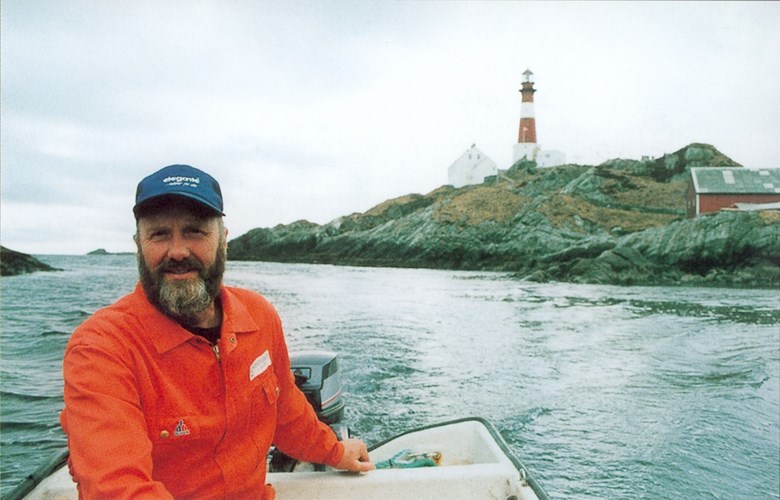 The Ytterøyane lighthouse is located in a nature reserve, and this picture shows the lighthouse keeper Trygve Strømmen on an inspection tour around the islands in a small boat on a sunny day. Ytterøyane is one of about 30 lighthouse stations that are still manned in this country.

A coast and seaward entrance lighthouse

The round, red cast-iron tower with a white band is 31 metres high. The tower rests on a concrete, octagonal foundation, and the lens is close to 50 metres above sea level. The view is spectacular from the ocean in the west to the Jostedalsbre glacier to the east, in the north you can see Stadlandet, and to the south the characteristic mountain island of Alden, and the mountains further south to Sula.
The Ytterøyane lighthouse is a coast and seaward entrance lighthouse, with three white flashes per minute. The original 1st order lens has been rebuilt somewhat, but is still in use. The first radio-telephone, the weight casing and the weight driving the "clockwork" for the lens rotation are still stored in the tower. The machine house, the residence, and an outbuilding - all built of concrete - huddle together close to the tower. The residence is so big that it is equipped with four chimneys. The roof is covered with slates. The silhouette of this compact, well-formed building complex is visible at long range.

The first thing that strikes you when you go ashore on these islands in summer is the colourful and intense profusion of flowers, and especially around midsummer. There is also a rich and varied bird life, and the lighthouse is located in an area which is legally protected as a nature reserve. The lighthouse keeper is responsible for the management of the reserve, and, in addition, carries out daily readings of meteorological data.
In the first few years, there was only a lighthouse keeper and an assistant, but later on, it was changed into a family operation. The access to the lighthouse station is fairly good, but in former times it was important to have enough provisions and supplies for long winter months. When the weather was extremely bad, it was impossible to get to or from the islands, so the people at the lighthouse could be isolated for long spells at a time.

Bullet holes in the tower

During the First World War, the crew from a torpedoed boat came to Ytterøyane and was helped by the lighthouse people. During the Second World War, the German Wehrmacht took control of the lighthouse operation. They planted thousands of landmines on the islands, installed an anti-aircraft gun on the roof of the residence, and a bigger-calibre gun just to the west of the tower. Once or twice, they shot at British planes on their return from air raids to Florø. One of the planes turned around and peppered the tower with its machine gun. A German soldier was killed and several others were wounded, and the big and valuable lens was partly destroyed in the shower of bullets. Bullet holes can still be seen in the tower even today.