Along the Sognefjord and in the mountains between Sogn and eastern Norway and elsewhere in the county there are many elegant buildings that the master builder Anders O. Korsvold (1856-1912) erected. Korsvold was much in demand as a master builder in Sogn. He built primarily hotels and churches, but, in addition, he erected and restored a number of other buildings. 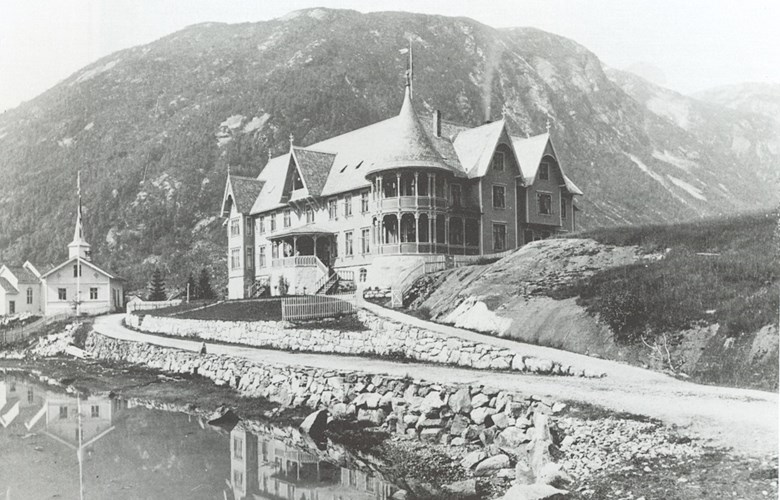 Lived at Fonna in Gulen

In 1883, Anders O. Korsvold married Orlaug Andersdotter Kråkenes (1855-1944). They had eleven children, of these five boys and four girls grew up. The family lived the first year at Krossvoll, then one year at Fonnevika, before moving to Fonna in 1885. There Korsvold built a new house and a barn. In 1888, he bought the farm Fonna from a bankrupt's estate. At this farm the Korsvold family had some sheep and poultry, in addition to a small orchard. It was his wife Orlaug who gradually had to take care of the running of the farm. Korsvold was away for longer periods as he got many building contracts in Sogn and neighbouring areas. He was called the "church builder at Fonna", but he might as well have been called the hotel builder. Korsvold was the master builder for a number of the renowned tourist hotels along the Sognefjord, besides some mountain resorts as well. He tended to use workers from Gulen for his building projects.

As early as in 1880, Korsvold was master builder for the Arnafjord church in the Vik parish, when he was merely 24. Later he got the responsibility for building the English Church at Balestrand - St Olaf's Church. The church was designed by Jens Zetlitz Kielland. The English Church - completed in 1897 - is a replica of a stave church. It was erected by the Kvikne family in memory of an English vicar's daughter, Margaret Sophia Green, Knut Kvikne's wife.

In the same year as the English Church was completed, Korsvold started the building of Nordal church in the Kinn parish. The church was consecrated in the autumn of 1898. Korsvold's tender of 7500 kroner was 50 kroner lower than that from the master builder Havnæs.

Mjømna church was consecrated in November 1901. Anders Korsvold both designed and built this church. The church is plain but elegant, built with the usual vestries on either side, and at the eastern end there is a high, square turret base which also functions as a porch.

In 1902, the building of the Sæle church in the Kvamsøy "sokn" (sub-parish), then belonging to the Vik parish. The church was designed by the architect Hans Jakob Sparre, with Anders Korsvold as a master builder. The church was completed in the spring of 1903 and consecrated on 28 April the same year.

In 1901, it was decided to restore the Dale church in Luster. The work was mostly carried out in 1903. Anders Korsvold was the master builder with Anders Olsen - "the big painter - from Lærdal as the master painter.

In the early winter of 1905, the building of a new church at Gaupne was started, and 18 months later the church was completed. Sparre was once again the architect and Korsvold the master builder. Sparre's two churches in Sogn are modelled after the Borgund stave church. 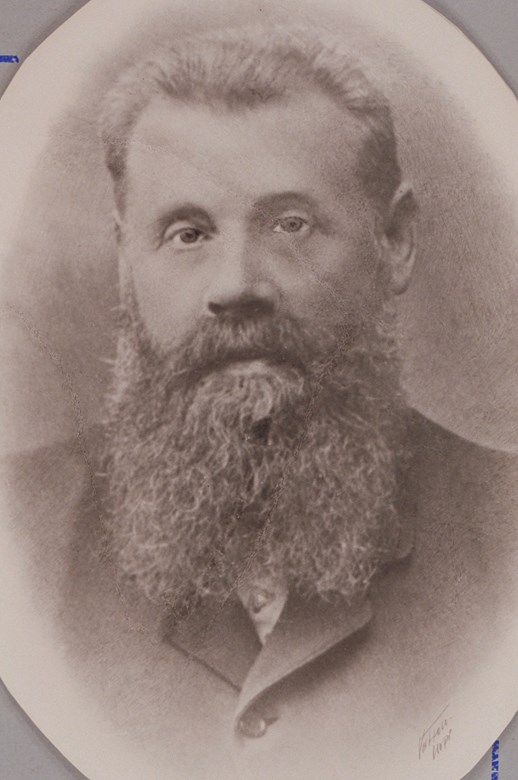 Korsvold was the master builder both for Kvikne's Hotel at Balestrand and Mundal Hotel at Fjærland. The Kvikne building was completed in 1890 and Mundal in 1891. Both hotels were popular destinations for foreign tourists, especially because of their architecture. In 1891, he rebuilt the main building at the Skjerjekamn inn. This is a big building in two storeys. The building contains guestrooms as well as a residence for the owner and his family. The house was built in the so-called Swiss style, in the same way as the other hotels he built at that time.

For a period in the 1890s, he was contracted to build two of the hotels at Filefjell. He had the responsibility for the re-building of Maristuen Hotell in the years 1892-1894, and later also for Nystuen Hotell.

When Fretheim Hotel at Flåm was to be extended in 1904, the choice of master builder was a foregone conclusion. At that time, Korsvold had made a name for himself in the construction business, which made him the first choice for the many building projects in Sogn. The following year he also had the responsibility for the re-building of the Eivindvik vicarage. 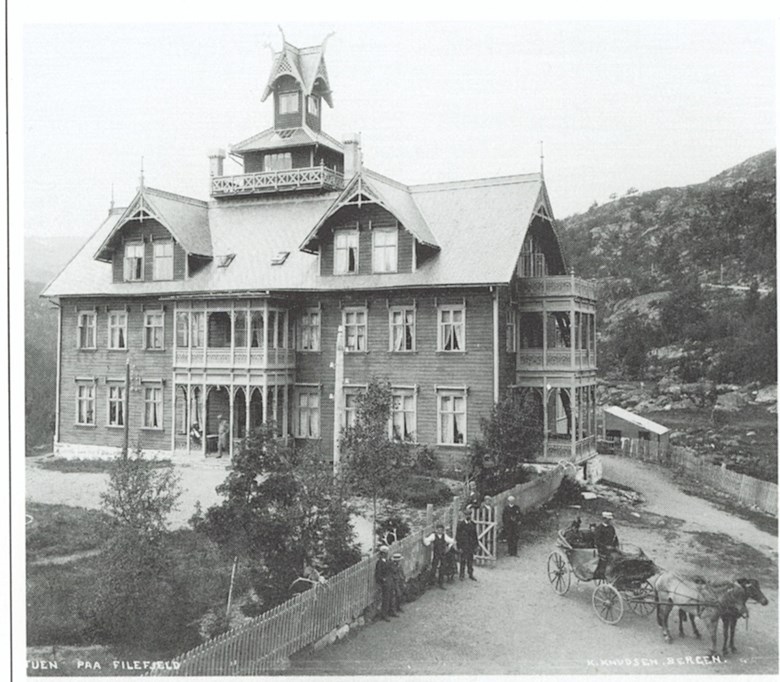 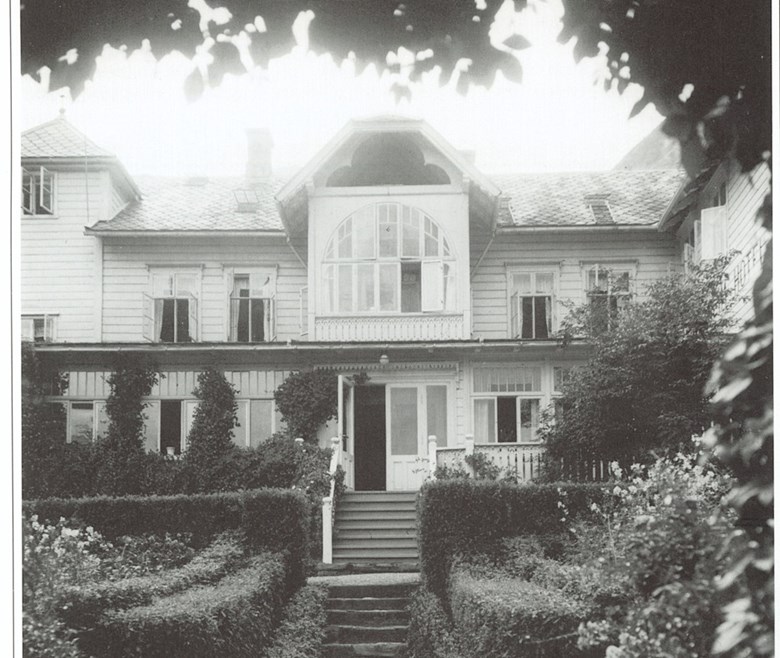 Anders Korsvold is famous for his buildings in the so-called Swiss style. The Swiss style was an extremely popular architectural fashion on Norwegian wooden buildings from the 1860s up to about 1920. The building style was influenced by the rural building customs in Switzerland and Tyrol. The style is particularly characterized by protruding verandas and balconies, intricate gable constructions and highly protruding roofs.

According to the 1900 census, Korsvold lived at Fonna in Gulen. But at the time that the census was carried out, he was working in Luster. At that time he had the responsibility for constructing the foundation walls of the Luster Sanatorium which was completed in 1902.

In Gulen, Korsvold built the residence on the farm Krossvoll, the bailiff's house Solvang and the doctor's residence at Eivindvik. He died of pneumonia on 14 October 1912, when he was working on his biggest construction project, the completion of Kvikne's Hotel at Balestrand. Korsvold was only 56 when he died, but he left many marks in the form of magnificent buildings. The fine villa of the artist Hans Dahl at Balestrand is also said to have been built by Korsvold. Some of the hotels he built have later burned down or have undergone drastic changes, but the main wooden building of Kvikne's Hotel remains more or less the same as when Korsvold built it. 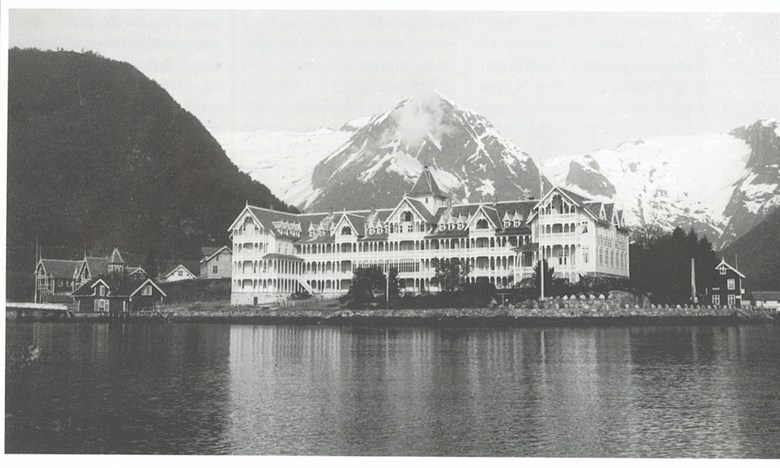 Today the grandson of Anders O. Korsvold, Ansgar O. Korsvold, lives on the farm at Fonna. There they still have the chest of drawers and the sewing box that Anders O. Korsvold made as an apprentice in Bergen. Ansgar's sister, Astrid Kjellevold, says that in their house at Fonna they used to have a picture hanging on the wall with Gaupne church as a motif. There were several pictures in the same frame, both exterior and interior pictures of the church. Under the picture it was written that the church was built in King Haakon VII's second year of reign (1906).

Orlaug Andersdotter Kråkenes from southern Kråkenes in Solund was married to Anders O. Korsvold in 1883. They had nine children. The oldest son, Ole Andreas (1884-1975), became a master painter and worked with his father on some building projects. Orlaug Korsvold is said to have been a resourceful and knowledgeable woman.
Owner: Fylkesarkivet, SFFf-93379.0013. - Date: 1910. - Photographer: Ukjend.
Fylkesarkivet, SFFf-93379.0013.
1910.
Ukjend.

Mjømna church was designed and built by Anders Korsvold. The church was completed in 1901. Korsvold supposedly built seven churches, and six of these are referred to in this article.
Owner: Gulen kyrkjekontor. - Date: 2001. - Photographer: Ukjend.
Gulen kyrkjekontor.
2001.
Ukjend.