The farmyard tree at Skorpeidet - memorial tree for a navy serviceman

''Close to the house was a birch so wide / there the magpies had their old nest,'' sings Ivar Aasen in his song Gamle garden. (The old farm). In former times in the country, most homes had a big and elegant tree in their farmyard. Close to a residence at Skorpeidet, on the island of Skorpa west of Florø, is an unusually big Sitka spruce. This farmyard tree has a very special story attached to it. In a way it is also a memorial tree for the navy serviceman Adolf Skorpeide. 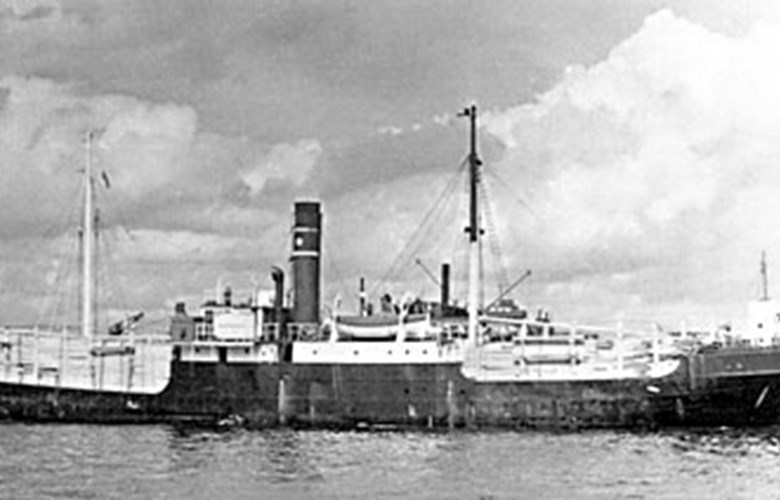 The steamer "Galatea" that Adolf had signed on and which was torpedoed on 21 January 1945 in the Irish Sea when Adolf was hospitalized. Only one man of the 20-men-strong crew was rescued.

More than three metres in circumference

The Sitka spruce at Skorpeidet is one of the biggest trees on the whole island of Skorpa, and it is more than 60 years old. Its height has never been measured, but the circumference at ground level is some three metres. High up in this farmyard tree, as in the birch in Ivar Aasen's song, there is a huge magpie nest where there is much commotion every year.

A fugitive bound for England planted the tree

It was Adolf Skorpeide who planted this elegant tree in May 1941. This happened just before he left for England on the motorboat M/K ''Erling'', and thereby saving the lives of six-seven fugitives who had the Gestapo at their heels and had to get out of the country in a hurry.

Adolf planted three small spruce trees close to the house, but only one of the trees made it. The two others disappeared, either eaten by sheep, or cut down in the haymaking season.

What kind of thoughts that raised through the mind of this young man from Skorpeidet when he in a kind of symbolic farewell planted these spruce trees in 1941, no one will ever know. This took place in the midst of a big and bloody world war, and he had taken on the responsibility to take wanted fugitives to safety across the North Sea. He may also have considered signing on to active war duty.

During the first year in England, Adolf Skorpeide ran a fishing operation from Buckie with other Norwegians, but on 17 July, he was ordered to go to London to join the Norwegian merchant marine that was at the disposal of Nortraship. On 4 August, he signed on SS ''Varøy'' from Haugesund. On the eve of 8 October 1942, ''Varøy'' sank on the English east coast after colliding with another ship in the convoy. The whole crew was rescued.

Two weeks later, Adolf signed on SS ''Galatea'' which plied the coastal waters of the British Isles, an extremely dangerous area full of mines, and with frequent attacks by German planes and submarines. Adolf fell ill and was hospitalized on 17 January 1944. One week later, ''Galatea'' was torpedoed in the Irish Sea, and only one man in the 20-men-strong crew was rescued.

After being discharged from hospital and after a period of convalescence, Adolf signed on SS ''Vest'', and remained onboard this ship until the spring/summer of 1945.

The war nightmare left its marks

Adolf Skorpeide returned home when the war nightmare was over, but everything that he had gone through physically and mentally had naturally taken its toll. He died in 1993, almost 75 years old. But the farmyard tree that he planted in 1941 still remains to this day. In this context, it may be appropriate to quote the words of another writer, Per Sivle, from his poem Merkesmannen(The Standard bearer):

When Adolf was buried at the churchyard in Florø, many people attended the funeral to take a last farewell. Among these was an elderly man most people did not recognize. It turned out that he was one of the fugitives who had crossed the North Sea on the motorboat ''Erling'' in 1941. Now he was the only survivor. He had come to take a last farewell with the man who 52 years earlier - at the young age of 22, and at great risk for his own life - had helped him across the sea when Gestapo was at his heels. It was Adolf Edvin Skorpeide who had carried out this deed.

The huge Sitka spruce, the farmyard tree, by the residence under Eiakletten at Skorpeide on the island of Skorpa. Adolf Skorpeide planted the spruce tree in 1941.
[The Latin name for the Sitka spruce is Picea sitchensis, sitchensis means 'from Sitka' in Alaska].
Owner: Firdaposten. - Date: 2003. - Photographer: Malvin Toft.
Firdaposten.
2003.
Malvin Toft.

Adolf Skorpeide (1919-1993) photographed in his younger days. Adolf Skorpeide was one of our war heroes from the Second World War, but also one of those who were disgraced afterwards. He was skipper on the motorboat "Erling" across the North Sea with Norwegian fugitives onboard. He worked on two merchant ships abroad and was also seriously ill for a long period. The strain left its marks and Adolf Skorpeide became one of the navy servicemen who got alcohol problems and who, according to gossip, was "just hanging about doing nothing in England".
Malvin Toft has shown us who Adolf really was and told the story of his war effort in his book Båtar med sjel (Boats with souls), and thereby given the man full rehabilitation after years of disgraceful gossip.
Owner: Ruth Skorpeide og i "Båtar med sjel." - Date: Ukjend. - Photographer: Ukjend.
Ruth Skorpeide og i "Båtar med sjel."
Ukjend.
Ukjend.

M/K "Erling" with the registration number SF-58-K (SF: Sogn og Fjordane, K: Kinn, municipality 1866-1964) at the boathouse belonging to the parents of Adolf Skorpeide. The boat transported seven fugitives across the North Sea in May 1941. The boat was requisitioned by the Royal British Navy and was used as a supply boat for the naval base of Scapa Flow on the Orkneys. During the invasion in France in the summer of 1944, "Erling" was one of the boats that picked up dead bodies from the sea.
"Erling" returned to Norway in the autumn of 1945. On 1 October, the boat came to Bergen with the same man at the helm as on the western crossing four years earlier,- Adolf Skorpeide.
The boat was repaired and was used as a fishing boat until 1970.
Notice the Sitka spruce in front of the house. The tree may be about ten years old, and we can thus date the picture to the early 1950s.
Owner: Ruth Skorpeide/i boka <i>Båtar med sjel.</i> - Date: 1950-1955. - Photographer: Ukjend.
Ruth Skorpeide/i boka <i>Båtar med sjel.</i>
1950-1955.
Ukjend.
resources:
Toft, Malvin: Båtar med sjel. Selja Forlag, 2002.