Husøy is one of the westernmost islands in the western Sogn district. The topography is one of rocks, islets, and islands. Blue ocean and grey rock. There is very little forest, but some areas with green grass tell us that domestic animals have been kept here. The trading post is situated on the south-west side of the island, at the sound between Husøy and Kirkøy. Husøy chapel stood at Kirkøy from 1717 until 1900. 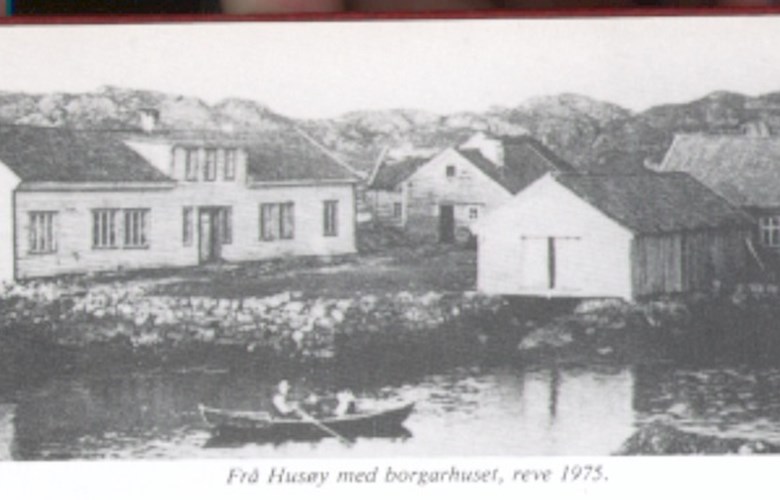 The citizen's house which was torn down in 1975.

Trade in the 17th century

Husøy has from times immemorial been a place where fishermen gathered for the spring herring fisheries. As early as in the 1600s, there was trade here. A complaint before the tax court in 1686 indicates that there were as many as six traders. Some of them had started up before 1650. In 1742, Christen Møller lived at Husøy and worked the farm. The bailiff of Sogn wrote in a dispatch in that year that Husøy was important for people who took part in the fisheries for some weeks in the spring, and who needed some beer and brandy for refreshment. - Møller later lost his civil rights by court order.

Around 1750 it seems that there was neither trade nor an inn at Husøy. Vilhelm Lexau bought the trading post in the late 1760s and started trading. For a period of time, the rich merchant from Bergen sold fish abroad for an annual sum of about 10,000 "riksdaler". Some of this fish came from his two trading posts in this district, at Husøy and at Gåsvær. At these posts, the fishermen sold their catch. It was sent on by his shop assistant to Bergen by boat.

Ravaging by the French

At the end of the year 1781, a French warship which had been chased from Bergen arrived at Husøy. The crew turned out to be nothing but pirates. They pillaged on shore day in day out. The apprentice, Frants Tønsberg, very nearly suffered death, but was able to rescue himself and his family by escaping to Straumen. The French crew slaughtered two cows, a pig, four English and one Norwegian sheep. They consumed quantities of beer and brandy, and they stole a lot of furniture and clothes. Houses were destroyed when they broke into them. Such conduct is believed to have taken place at Bulandet as well.

In 1801, Carl Frid. Lindseth was trade assistant and innkeeper at Husøy. He lived there with his wife, three children, and four servants. In the 1780s the trade post had been bought by the firm 'Lyder Wentzel og Sønn', owned by Lyder W. Nicolaysen. They owned and operated Husøy until around 1850. Then another Lexau bought the trading post of Husøy, Hans Andreas Lexau from Bremanger. This was at the peak of the herring fisheries, and Lexau bought and salted herring. He also traded with various other commodities, fish as well as general merchandise. Lexau brewed beer and sold it in pots. He became a wealthy man for his time. It seems that he took good care of his belongings and developed them. When he died in 1884, his widow hired out the general shop to Karl Hauge. 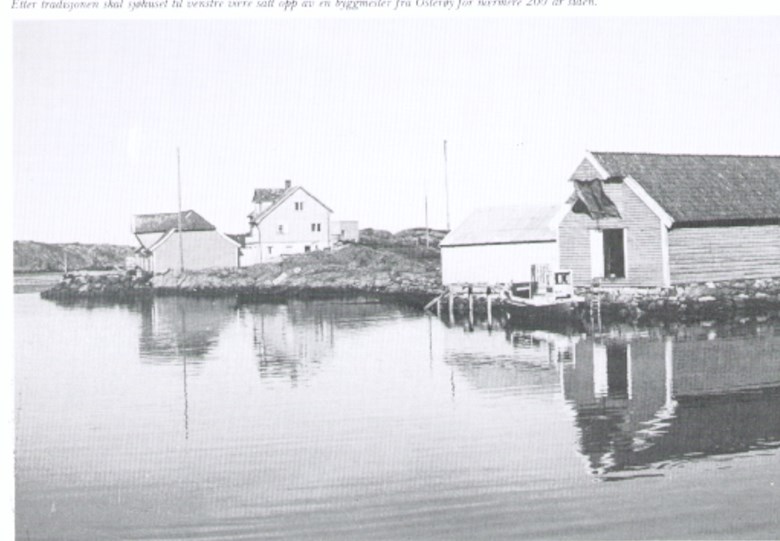 Ivar Henriksen took over the shop in 1899, and after some time was able to buy the trading post. Fylkesbaatane (steamship company) turned down petitions for Husøy to be a boat stop both in 1903 and in 1906. In 1910, a post-office was opened at Husøy, and the following year, Ivar Henriksen requested that Husøy have as many steamship calls as Rognsvåg at Fedje. In 1912, these two places had three steamship arrivals per week.
The quay in concrete at Husøy was built in 1951, and Husøy was now included in the steamship schedules between Bergen, Solund, and Gulafjordane. On the hill above the quay, Harald Henriksen had his house built in 1954, with a shop on the ground floor. Harald took over the shop and one half of the farm in 1949. Peter Henriksen took over the fish trade and operated it until 1959. The shop was closed down in 1977. 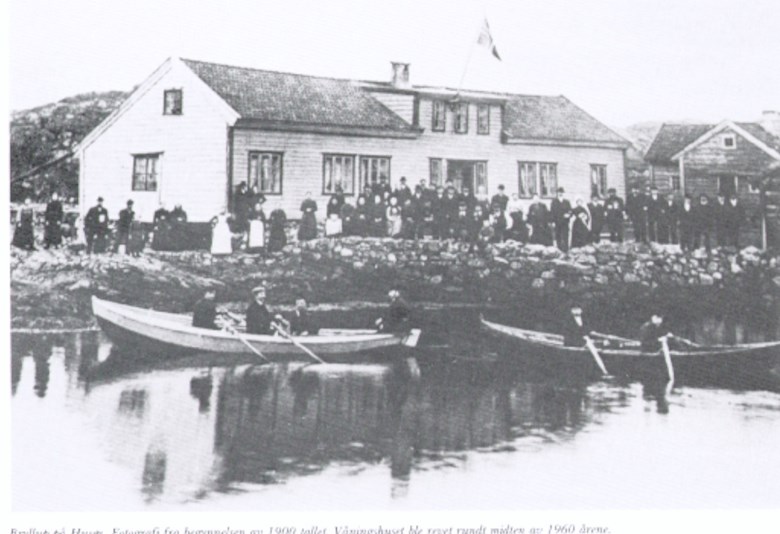 The main building, "borgarhuset" (literally, the citizen's residence), which Lyder W. Nicolaysen had built around 1787, was torn down in 1975. Tradition has it that the old citizen's house originally came from Kinn, where it served as a vicarage. Of the old buildings, only a boathouse and a sea warehouse with a shop are left. A new residential building was put up in 1954. The shop was moved to the basement of the new house. There are remnants of the foundations of the old residential building, some boathouses, a taproom, an "eldhus" (used for baking and washing), and a small cottage.

The citizen house torn down

At Ivar Henriksen's time the old citizen's house was still standing, at the bay. It was a timber building 21 metres long. On the opposite side from the sea, there was an external gallery along the whole length of the house. On this side, the roof was turfed until after 1900. There were three living-rooms and two small bedrooms on the north side. The kitchen was at the back, and there was a hallway at the front. In front of the south side was the taproom, which earlier had been a general store, and the old boathouse. The new warehouse, which was put up in 1910 and fitted up as a general store, was built crosswise of the old boathouse. At the edge of the bay was the salting shed, the commodity storage room, and the seine shed, and the bigger boathouse. Farthest out in the bay is the warehouse. It is of timber and was erected by Nicolaysen at the end of the 18th century. 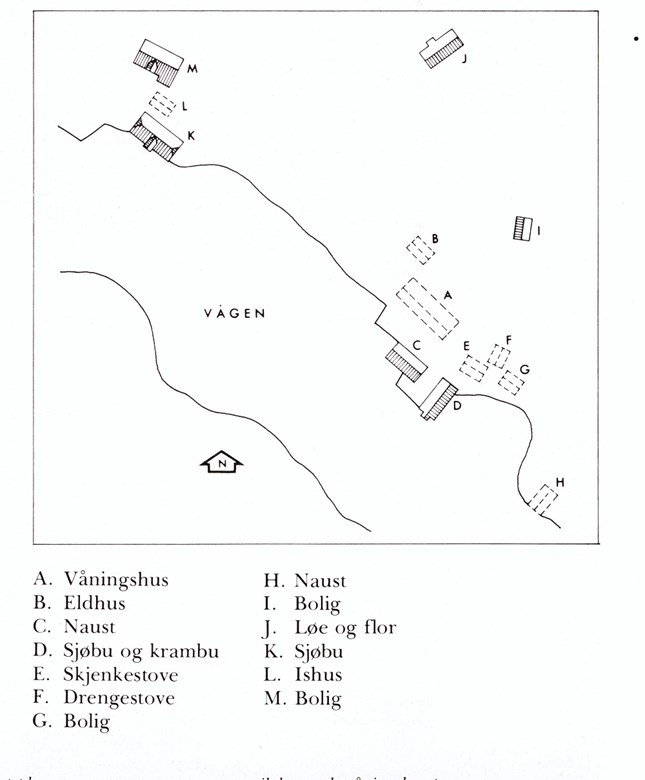 Today, in the year 2001, there are no permanent inhabitants at Husøy. The place is still owned by the family Henriksen, but they use it only for recreation.