Rescuing kids (goats) from the gully of Koldegjelet at Undredal

In the summer months the kids kept for breeding were released to graze by themselves along the fjord. Owners had to see to them on a regular basis to prevent the animals from becoming too wild and perhaps disappear up in the mountains. The goats gradually became very agile by moving about in the steep mountainsides, but it sometimes happens that they get stuck. Then we have to go out and try to rescue them to safe grounds. This happened on 22 July, 2007. 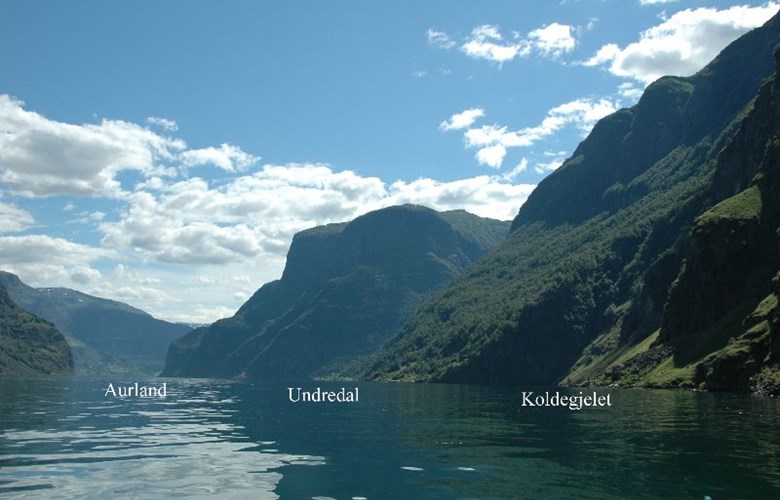 The picture gives a general view of the location of Koldegjelet in relation to Aurland and Undredal.

Kids kept for breeding
Every winter in January/February the kids are born in the goat sheds at Undredal. On average each milk goat gets 1.5 kids. Each goat farmer keeps a certain number of kids from the highest-producing goats. These are allowed to live to replace those goats that will be taken out of the flocks for various reasons, such as old age, disease or injury, and so on. Some billy goats are also kept.
These kids are kept in a separate pen in the shed until spring comes. Then they are released to graze along the fjord. Each farm has its separate area. Our 19 kids were released in May in the mountainside between Koldegrufsa and Koldegjelet, just before the Stigen farm.

Getting used to an outdoor life
The very first day the kids feel a little lost. They have not experienced anything but their own small pen. Suddenly there is no roof above their heads and the ground is slippery and steep.
It is vital to see to that their hooves are fine to enable the kids to get a good footing on the rocks. In addition, we have to teach them that the fjord is not a fine and flat carpet they can walk on. This is something the goats learn the hard way as they are pushed into the fjord where it is safe and shallow. Once we forgot to do this and then we found a drowned kid the following day.
During the first week we see to the goats practically every day, giving them pellets (grain feed) down by the fjord to teach them to come when we call for them. It happens frequently that we have to fetch them even if they are standing only a few metres from us. They still do not feel safe, but by and by they pick up courage to move further up the mountainside to get to the best fodder.

Getting stuck
Very rarely it happens that the kids get stuck on ledges on steep crags. Even if they are incredibly agile, occasionally they jump down on some ledges which are so high that they are trapped and cannot get up again. The gully of Koldagjelet constitutes such a trap. This is the second time in a matter of a few years that we have to rescue goats from this spot.

Spotted the kids
We spotted four kids on the ledge on 21 July when we were out seeing to them. Only one out of 19 kids was found down by the fjord. We shut off the engine and called for them. Then we heard some whimpering sounds from the mountainside. After a while we managed to get sight of four kids stuck on a small ledge high up. The ledge was completely dark and this proved that they must have been stuck there for some days. While we were watching them, a pair of ravens came swooping down towards them and scared them so much that they ran to the other end of the ledge.

The expedition
The very next morning we packed our gear with 100 metres of rope, climbing harness, rappel equipment and grain feed. We - the owners Ivar and Pascale - also put on solid shoes. The trip lasted 4 ½ hours. First we went by boat to the gully of Koldegjelet. When we went ashore, the lonely kid we had seen the day before had been joined by another. It turned out that this was one of the four stuck on the ledge which had been able to find a way out of the trap. Whether it had climbed up or down we shall never know, but it did not seem to have any injuries from falling.
In order to save the remaining three kids, we had to climb to a point above them. Then we had to climb down, drag them up by rope and lead them down to the fjord.


Puddles and seaweed
The climb down went smoothly. The kids grazed voraciously to fill their empty stomachs. People from the Stigen farm phoned to tell us that the 14 kids we had not seen at all were approaching the river of Koldao at the same altitude as Stigen. As long as they were not stuck, there was no reason to worry. Coming down to the fjord, the thirsty kids drank water from small puddles and started to eat seaweed.


A special "kid ladder"
We assume that this particular ledge is no longer tempting, but so much manure was spread that it will perhaps be green and tempting next year. If so, we may have to consider building a kind of ladder so the kids can get up by themselves.