Monument commemorating Hans Schreuder - the apostle of the Zulu people

The Norwegian Missionary Society was founded in 1842. Two years later, the Society sent its first missionary to Africa, Hans Paludan Smith Schreuder. He was born in Sogndal in 1817, and died in Africa in 1882. In 1992, mission friends erected a memorial stone at the Stedje church in Sogndal. 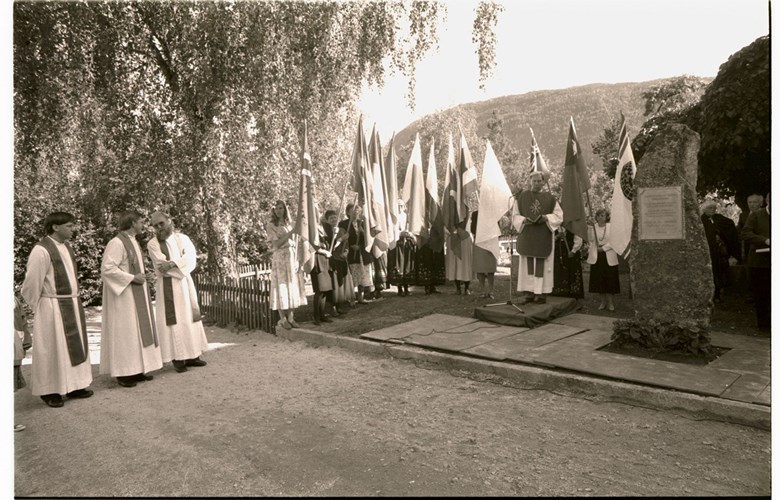 From the unveiling ceremony on 6 September, 1992. Missionary women were flagbearers.

Hans Paludan Smith Schreuder, missionary and linguist, was born in Sogndal in Sogn on 18 June, 1817. He was son of a solicitor, later on bailiff, Otto Schreuder, and Anne Cathrine Smith. In 1832, the family moved to Farsund in the south of Norway. Hans Schreuder was married twice; in 1858 to Jacobine Emilie Adelheid Løwenthal (1814-1878), and in 1879 to Dorothea Luise Friderike Rag (1835-1898). There were no children in either marriage. He died at the mission station of Untunjambili in Natal on 27 January, 1882. 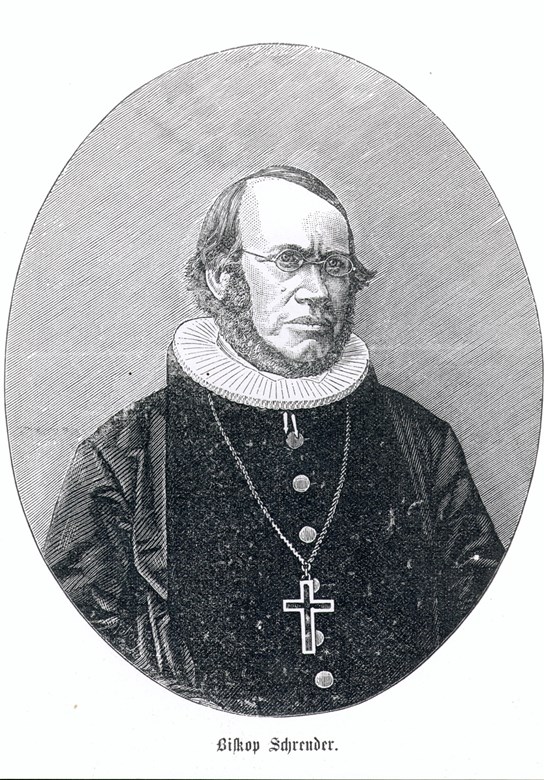 In 1841, Schreuder passed his theological examinations with distinction. He wrote an appeal to the Church of Norway, urging it to carry out missionary work among non-Christian peoples, and declaring himself willing to work among the Zulu people in South Africa. At the same time a committee was established to raise money for the project. Schreuder was ordained to serve as a missionary in 1943, and the following year he went abroad as the first missionary for the Norwegian Missionary Society founded in Stavanger in 1842. 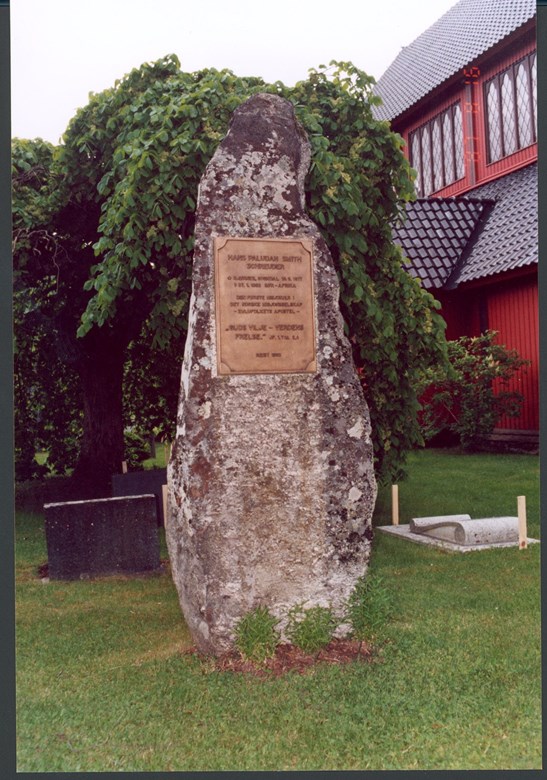 Accompanied by two assistants he arrived in South Africa on New Year¿s Eve, 1844, but was only allowed access to the Zulu people to the north of the British Natal colony in 1850. The first mission station was Empangeni, founded in 1851, and with three new missionaries the work could now get started in earnest. The first baptism took place in 1858, and by and by congregations were established at a number of mission stations.

Schreuder devoted much time working with the Zulu language. He wrote a grammar (published in Christiania - Oslo - in 1850), collected material for a dictionary containing between three and four thousand words (manuscript), published a reader, and translated a number of articles to the Zulu language, as well as parts of the Bible.
In 1866, Schreuder returned to Norway and was then consecrated as "Bishop of the Mission Field of the Church of Norway". Shortly afterwards, however, the relationship with the Norwegian Missionary Society became strained, leading to a break with that organization. Schreuder carried on his missionary work in "The Church of Norway Mission established by Schreuder, also called the Schreuder Mission.
Hans Schreuder died at the mission station of Untunjambili in Natal on 27 January, 1882.

The monument commemorating Hans Schreuder in Sogndal was unveiled on 6 September, 1992, with many people attending. At the ceremony two ¿mission friends" said something about why mission supporters had erected this stone. One was Mr Odd Håvik, the leader of the mememorial committee, and the other was Mrs Eldbjørg Åm, one of the two women unveiling the monument.

Not to encourage to any cult of saints

"With this memorial we do not want to establish any cult of saints or glory of Schreuder. We have simply accepted a challenge that Schreuder was worthy of a memorial. We have chosen a simple memorial stone ..." (Odd Håvik).

"We have found a stone that we feel remind us of Schreuder as he was. When I first saw this stone, it gave me the impression of someone who stands talking to people. I hope that whenever people come to this place, they will be reminded that someone left Sogndal to tell about Jesus. This is the most important thing. Maybe the motto engraved here can become a call. This is something I have to take part in. Something that may contribute to a new fervour in the country. That the work started by Schreuder is not to die out with our generation. Know your responsibility!" (Eldbjørg Åm).

Missionary bishop Schreuder. Xylography after a photo to be used for printing.

In the summer of 1842 visited Sogndal. He then heard about a young girl in the village of Veitastrondi, 'Syne-Martha', who had begun to experience inexplicable visions. He went to see her, and afterwards published a paper about this remarkable and famous girl.
Owner: Sogn Folkemuseum - De Heibergske Samlinger, Sogndal. - Date: 1842.
Sogn Folkemuseum - De Heibergske Samlinger, Sogndal.
1842.

The Schreuder memorial at Stedje church in Sogndal. The stone has a height of some two metres (about seven feet)and the rock is 'Hafslo granite'. The stone was found in this shape at Ølnes. On the bronze plaque is inscribed: 'Hans Paludan Smith Schreuder (* = born) KJØRNES, SOGNDAL 18 June, 1817 (V = died) 27 January, 1882 South Africa. The first missionary in the Norwegian Missionary Society - 'God's will - the world's salvation' - Cf.1 Timothy 2,4. Erected 1992.' (1. Tim. 2,4: .. who will have all men to be saved and to come unto the knowledge of the truth.) (1. Tim. 2,4 står: .. han som vil at alle menneske skal verta frelste og koma til å kjenna sanningi.)

Envelope of letter from W. Wexels in Christiania (Oslo), dated 21 June,1843, addressed to vicar Thorne, Leikanger, where he on behalf of the fund-raising committee expresses thanks for contributions to 'Shreuder's (sic) Mission' in the parishes of Leikanger, Tjugum, Fjærland, Feios, Fresvik and Vangsnes. Schreuder was staying in Christiania at that time. On the envelope is written: 'Contributions to Schrøder's (sic) Mission 21 June, 43'. Wexels also adds that 'It pleases the dear Schreuder immensely to accept these testimonies of participation in his work..'
resources:
Avisa Sogn og Fjordane. Hermansverk. 07.09.1992.
Norsk Biografisk Leksikon. bd 12. Oslo 1954.
Schreuder, H: Syne-Martha. Bergen 1842.
Brev til sokneprest Thorne, Leikanger, 21.06.1843.