After the mobilization on 9 April 1940, men from the whole county of Sogn og Fjordane mustered at Bømoen at Voss. From 19 April, some 2000 men were transferred east and took part in the Valdres campaign until the capitulation on 30 April. Konrad Byrknes was one of the few who did not make it back home alive. In July 1945, a memorial stone was unveiled on his grave at Mjømna church. 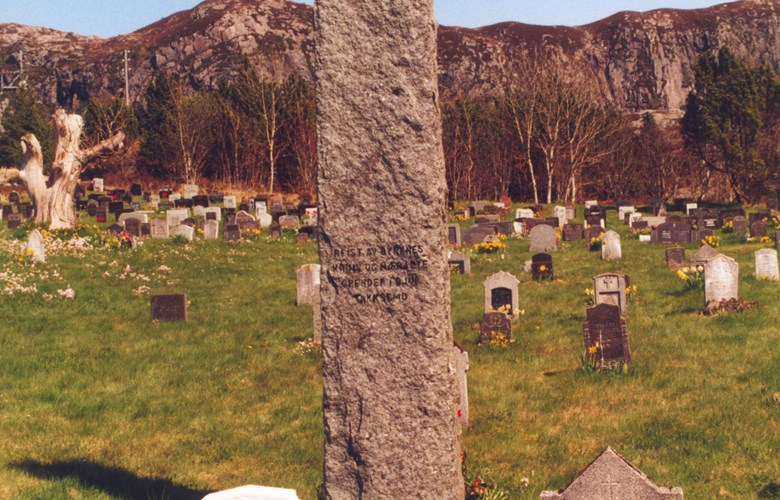 BYRKNES, KONRAD KRISTOFFERSEN, fisherman, Gulen. Born 7 May 1915 at Byrknesøy, son of Kristoffer Kolbensen, born 1889 at Byrknesøy, and Ingeborg née Martinsen, born 1884 at Fedje. Married 1940 at Byrknesøy to Berly Ingvaldsdatter Nordheim, born 1917 in Gulen. 1 child. Fell in action as a machine-gunner at Bagn in Valdres on 20 April 1940. Buried at Mjømna church.

At the front, facing the east:

ERECTED BY BYRKNES * NEIGHBOURS AND NEAREST * HAMLETS IN DEEP * GRATITUDE

Unveiling ceremony in the summer of 1945

A short while after Konrad was buried on 11 July at Mjømna, neighbours and villagers started to raise money for a memorial stone on his grave. A stone was bought, but what with one thing and another, the stone was not erected and unveiled at once. It was decided to wait until after the war. The stone was unveiled on Sunday 8 July 1945.

First there was a memorial service for the war victims. After the service people gathered at the memorial stone and the rostrum close by. The ceremony was introduced with singing by a choir from Byrknes before captain Skaathun gave the unveiling speech. The captain also took part in the Valdres campaign and had come to the unveiling ceremony upon the request from the Military West Norway District Command in Bergen. He concluded his speech with the following words:

"May this stone for ever stand in free Norwegian soil as a testimony to the people's loyalty and willingness to stand together in good days and bad."

After the speech, Harald Wergeland read a remembrance poem (prologue) written by Astrid Knudsen. The poem contains 35 stanzas, and describes the boy and the man, the outbreak of war, mobilization and departure, anxiety and waiting, one who never returned, the grief and the sorrow, but also gratitude.

The stone handed over to the church "sokn"

The chairman of the committee, Harald Wergeland, gave an account of the work that had been carried out to erect the stone, and then handed the stone over to the church "sokn" (sub-parish), represented by the "sokn" council. A number of wreaths were laid down at the memorial, from the next of kin, the congregation, "Byrknes og Øyane Fiskarlag" and the Army.

Konrad Byrknes's name is also inscribed on three other memorial stones: a) on the memorial (The Infantry monument) at Bømoen at Voss, b) on the memorial at Byrknes, and c) on the memorial stone at Eivindvik for all the war victims 1940-45 from the then municipality of Gulen. In addition, there is also a memorial at the place where he lost his life, Gråbeinhølet, Valdres.
Owner: Fylkesarkivet/Berly Vesetvik. - Date: 1990-talet. - Photographer: Ukjend.
Fylkesarkivet/Berly Vesetvik.
1990-talet.
Ukjend.
resources:
Avisa Sogn og Fjordane. 17.07.1945. Leikanger.
Våre falne. Oslo 1949.
Bragstad, Jakob: Fjordane Infanteriregiment nr. 10 i gamal og ny tid. Oslo 1996.
Opplysningar frå:
Berly Vedsetvik, Gulen.
Manuskript til avdukingstale og minnedikt.
Referat frå avdukinga ved Lars Gåta.