Memorial stone on the grave of Martin Luther Storm, principal of agricultural school

Martin Luther Storm, born 1836, is one of the most important names in the history of the agricultural schools in the county of Sogn og Fjordane. When the county gave up the school at Mo in 1870, Storm in the spring of 1873 came to Mo as a tenant, and he governed the school until 1907, when the county again took over. He died in the autumn of 1916, and in the summer of 1922, former students donated a memorial stone on this grave at the graveyard in Førde. 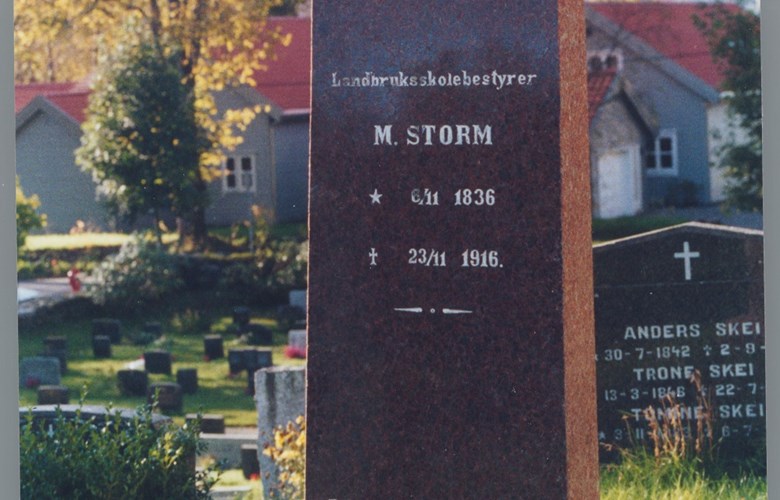 The memorial stone on the grave of Martin Luther Storm in the graveyard of the Førde church. The grave is on the east side of the church.

After Storm left the school at Mo, handing it over to the county, he settled as tenant farmer at the parish clerk farm at Solberg in Førde. "Here I now in my old age lead a peaceful bachelor's life," he wrote in an article about himself in the yearbook of Norwegian agriculture graduates in 1915. He died the year after, on 23 November, 1916. In the summer of 1922, former students and friends donated a memorial stone for his grave, on the east side of the church.

Who was he? In the book Sogn og Fjordane Landbruksselskap 1857-1957, 1957, there is the following short biography:

STORM, MARTIN LUTHER, born 1836, died 1916. not married, principal of agricultural school. Grew up in Trondheim, where his father was a vicar. Grammar school, Jønsberg agricultural school, Ås higher agricultural college 1859-1861. Teacher at Bunes agricultural school at Verdal 2-3 years, 1865-1869 manager at Lysekloster near Bergen and at Stedje in Sogndal, in the service of landowner Formann, who owned both of these properties. 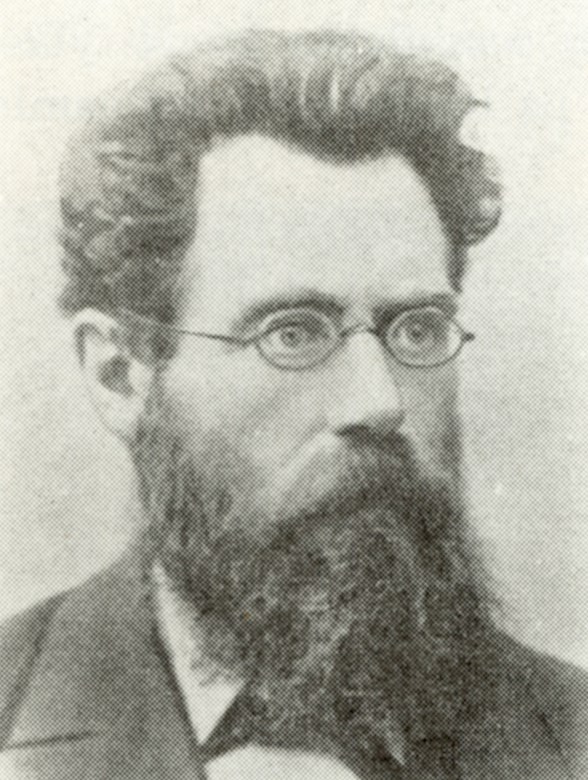 In 1869 he initiated a private winter school in Sogndal (what later became Sogndal Folkehøgskule], but transferred the school after two years to his colleague Jacob Sverdrup. In 1873, he became a tenant farmer at the farm Mo, owned by the county, in Førde, and started up a private agricultural school, with some financial support from the county. He governed the school until 1907, when the county took over.

Storm was chairman of the board of the agriculture society [Nordre Bergenhus Amts landhusholdningsselskap] 1874-1885 and his well-known capacity for order appears in everything left after him.

Forestry was Storm's great interest. [..] He received the silver medal from the forestry society and King Oscar II's prize for his contribution to forestry. In 1909 he was awarded the King's Order of Merit in gold.

Several hundred people had arrived for the ceremony. Member of Parliament Anfin Øen, who had been a student of Storm's, had promised to give a speech, but he had to ask to be excused. So in his place another former student, the chairman of the municipal council of Førde, Olai Tefre, spoke. He praised the life and work of the highly respected principal at Mo for 34 years, in very warm words. After the speech the audience sang a song written for the occasion by Karl Moldestad. "It was a touching ceremony to stand at the loved teacher's grave," as the local newspaper Fjordabladet in Nordfjord put it. 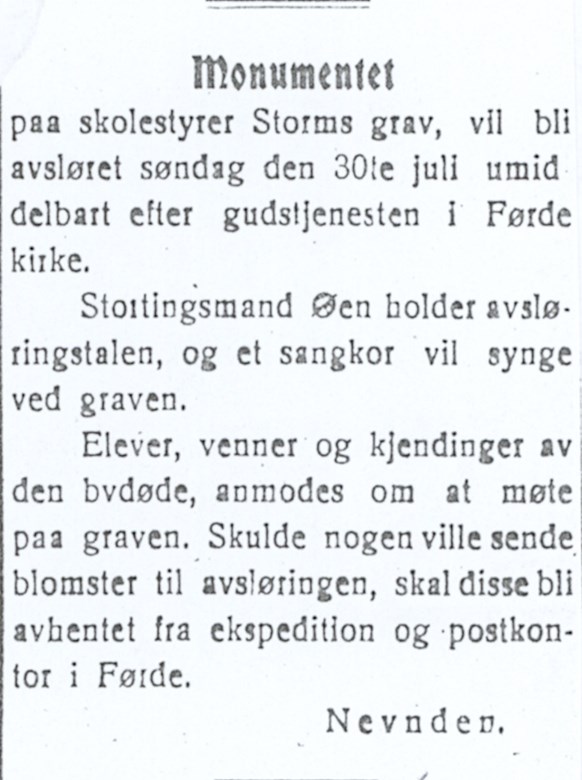 Martin Luther Storm (1836-1916). Storm is known primarily as an expert in agriculture and forestry, but he was also involved in other civic causes. He was f. ex. a member of Førde Youth Society for many years, and he was often on the podium as a reader and as speaker on 17 May celebrations.
Owner: I <i> Sogn og Fjordane Landbruksselskap 100 år.</i> - Date: Ukjend. - Photographer: Ukjend.
I <i> Sogn og Fjordane Landbruksselskap 100 år.</i>
Ukjend.
Ukjend.