Nearly 120 000 Americans lost their lives in the First World War, most of these at the front in France. One of them was Lorents Bakke from Bremanger. He emigrated to America in 1911. He returned home as a deceased American soldier in France and was buried on the churchyard at Novelandet. 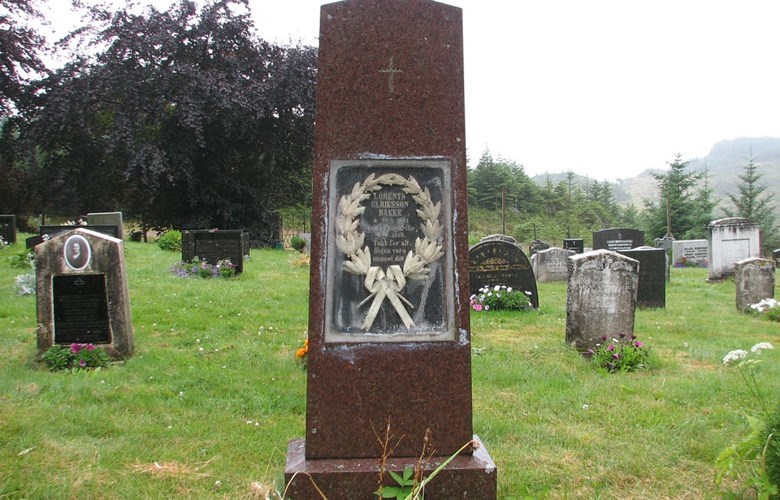 The memorial stone on the grave of the soldier Lorents Bakke at Novelandet differs from the other grave memorials. It is bigger and has a characteristic inlaid inscription. The inscription is made against a black background, and is encircled by a silver wreath, covered with a glass plate. The inscription:
LORENTS * ULRIKSSON * BAKKE * born 29/1 1891 * Fell in France * 6/10 1918. * Thank you for everything. * Blessed be * your memory

Originally there was probably a frame marking the grave in front of the stone, but such frames were removed to a large extent from the 1950s onwards to make it easier to mow the graveyard.

The eldest son left for America

The 1900 census shows that Lorents Bakke was the eldest son of farmer and seine master Ulrik Bakke and Karianne, née Løviknes. In 1871, Ulrik Bakke lived at the farm Rise in the Midtgulen "sokn" (sub-parish in Svelgen), but about 1895, the family moved to Bakke at Bremangerlandet. Ulrik Bakke is referred to as farmer, fisherman and seine master. In addition, he burned kelp. In the year 1900, Ulrik Bakke and Karianne had eight children. Everybody lived at home and helped with the many varied activities on the farm.

In the spring of 1911, Lorents Bakke left for America. He is registered as departed from Bergen on 25 April.

Returned home in a coffin

Lorents Bakke died in France on 6 October 1918, only a few weeks before the war was over on 11 November. Four years later, he returned to his homeplace at Novelandet in a specially made coffin. In a way, the circle was now complete. According to people, it was a "sturdy American soldier" who escorted him. The funeral took place at the graveyard of Novelandet on 16 May 1922.

A national archive in the state of Maryland, USA, has a section for military archives. In this archive there is a file on Lorantz Bakke (from Easton, Kansas), private, 1st/cl (first class), 2107572, Company F, 23rd Infantry. There is also information on the circumstances of his death, on his funeral, and how it came to be that he was moved to Norway and his home place in Bremanger.

In the morning of 6 October 1918, Company F was five kilometres from Somme Py. During their offensive, they came under heavy artillery and machinegun fire. A direct shell hit, and about 10.30 killed several soldiers instantly. Lorents Bakke was one of them.

Private Lorantz Bakke, 2107572, was first buried at a churchyard in St. Etienne-à-Arnes, Ardennes. The grave was marked with a cross with an identification tag. (Ulrik Bakke was sent a photo of the grave from the Red Cross). In the summer of 1919, the body was moved to the main churchyard for fallen soldiers, The Meuse-Argonne American Cemetery, Romagne-sous-Montfaucon, Meuse.

The father wanted to have his son brought home

We do not know at what time Ulrik Bakke got the message that his son was dead, but in the winter of 1918/19, he sent a cable to America where he asked for his son to be brought back home. Ulrik Bakke's request was granted. In May 1922, a coffin arrived at Kalvåg, escorted by conveyer Thomas E.M. Douglas. On 15 May Ulrik B. Bakke signed for "the remains of BAKKE, Lorantz, Pvt.[..]", and an American flag. The following day, Lorents Bakke was buried for the third time.

The gravestone differs from other stones in two ways. It is bigger than most of the others and it also has a characteristic inlaid inscription against a black background encircled by a silver wreath, covered by a glass plate.
Owner: Kyrkjeverja i Bremanger/Fylkesarkivet i Sogn og Fjordane. - Date: 2003. - Photographer: Knut Arne Vadøy.
Kyrkjeverja i Bremanger/Fylkesarkivet i Sogn og Fjordane.
2003.
Knut Arne Vadøy.
resources:
Opplysningar frå:
Ingvard Joranger, Kvinnherad.
Knut Arne Vadøy, kyrkjeverjekontoret, Bremanger.