The sea warehouse foundation walls on the islands in Flora

In connection with the rich herring fisheries in the Kinn parish in the 19th century, hundreds of fish salteries were built to process the enormous quantities of herring. For the most part, big and solid foundation walls were built for all the fish salteries and sea warehouses. These foundation walls were mostly built on the islands of Batalden, Kinn, Nærøyane, Reksta and Skorpa, in the westernmost part of the Flora municipality. Most of these walls still stand as a memorial to the rich herring fisheries. 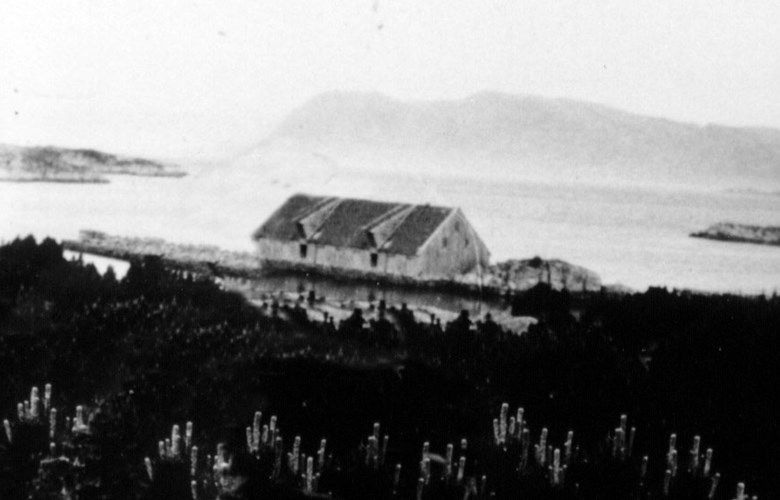 The old Lemkuhl house at Batalden as it probably looked like. The picture has been manipulated on the basis of a photo showing parts of the house in the background. The Lemkuhl house was wrecked in a southerly hurricane in 1931.

Since time immemorial, fish and life in the sea have been the very basis for settlement in Norway. The islands off Florø have probably been settled for more than 5000 years, and fishing has at all times played an important part. Ever since the 18th century, farmers from further into the fjords, from places such as Eikefjord, Førde, Naustdal and Holmedal, built fishing sheds and sea warehouses that were used during the winter herring fisheries. These farmers had their own boats and fishing gear, and they came sailing out to the coast with crew from their home village.

In the period between 1808 and 1873, the rich herring fisheries were an annual occurrence in the waters close to the islands of Batalden, Kinn, Nærøyane, Reksta and Skorpa. After a while, the saying was: "Go to Kinn and strike it rich".

At about 1850, the catches of herring increased enormously. Big fish salteries were built on the nearby islands to process the herring. The biggest fish-salting facilities were built by businessmen from Bergen, Stavanger, and as far south as Egersund. Big and comprehensive walls had to be constructed as foundation for these buildings.

The buildings were frequently insured against fire, and the old fire insurance assessment protocols show the size of the buildings and how fish salteries were made. The biggest facilities at Batalden measured as much as 32 by 12 metres, and on the island of Skorpa, and one fish saltery even had a length of 45 metres. The salteries were raised as half-timbered houses, and, according to the protocols, "of studding and clad with panelling". The roofs were covered with tiles, birch bark or turf. The salteries often had half-timbered additions as well.

Official statistics from 1862 showed that there were registered in all 337 fish salteries on the islands of Batalden, Kinn, Nærøyane, Reksta, Skorpa and some other islands. As the herring fisheries increased in volume in the 1860s, many more salteries were built after the counting was made in 1862. According to the 1862 figures, there were 65 fish salteries on Batalden, but there are now registered 120-130 foundation walls on Batalden alone. If this is also the case on the other islands, there is reason to believe that there were some 600 salteries in all in this area. Today only a handful of these old fish salteries remain on the islands, but most foundation walls are still intact.

The use of the salteries

The fishermen came sailing or rowing with their catches and the herring was taken into the ground floor of the salteries. These houses usually had two floors and a loft. After the removal of gills and guts, the herring was salted in barrels, and the barrels were then stored on the upper floor or on special platforms outside.

The fish salteries were also partly used for accommodation. In the loft, and also in the tiny room near the roof ridge, workers were lodged, both men and women. The herring fisheries took place in the coldest winter months of January and February, and the lodgings in the salteries were furnished with stoves. In the fire insurance assessment protocols, we can read the following: "In a loft section, there are two rooms, separated by panelling, and these rooms have two doors and two windows. There is also an iron stove which is placed through the central dividing wall, and serves to heat both rooms. Above these two rooms, there is a third room where a stove will be installed". Note the location of the stove in the dividing wall. During these fisheries, there were so many people assembled on the islands that fishermen and workers slept wherever there was a roof above their heads. They kept warm by huddling close together. In 1860, a total of 13 000 fishermen were registered during the Kinn fisheries, but the figure was probably somewhat higher.

After 1873, the herring disappeared from these waters, and later returned only sporadically. Consequently, there was no longer any use in keeping all the salteries. As these houses were built according to a simple construction method, many were easily torn down and moved elsewhere by sailing ships, and rebuilt where the fisheries were good enough for further activities. The tiles were loose and could thus be easily removed.

In the early 20th century, there were still a fair number of these houses left on the islands. They were used by locals in connection with their work at sea, and for storing various equipment and small boats. As the years passed, these salteries were not looked after and maintained properly, and with a few exceptions, they were either torn down or wrecked in storms.

On some of these foundation walls, new sea warehouses were built. With the ocean and the sea as their next-door neighbours, many people on these islands still made a living as fishermen. The fishermen needed sea warehouses that were adapted to their use. Most of these houses were built near the homes of the fishermen, and where the sea was deep enough so that bigger boats could dock. New quays were built when the need arose for more space in front of the sea warehouses. Some of these foundation walls have been filled with rock in connection with the building of roads or quays. 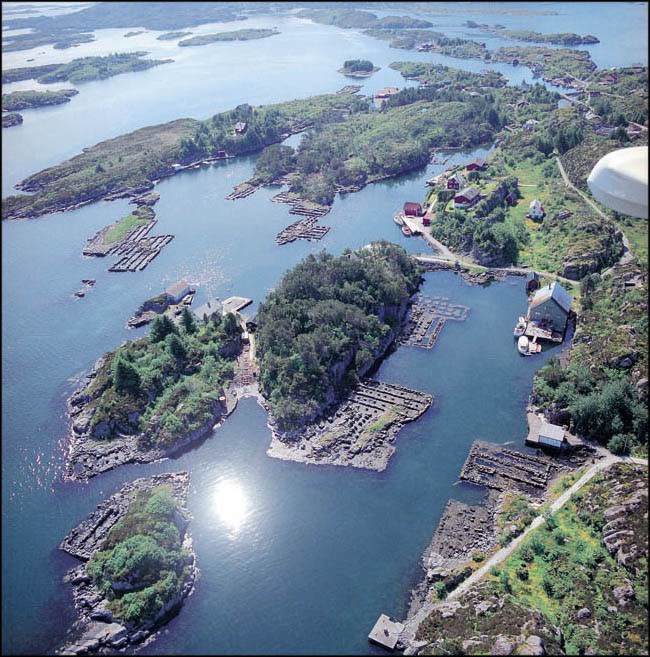 The picture shows the Batalden sea warehouse and local fishing boats in the bay of Nordre Fanøyvåg, Batalden about 1900. Further out, "purchasing vessels" are anchored up. Many years ago, the house was torn down, and was for a while placed at Sunnfjord Museum in Førde. The sea warehouse has since been moved once more, and has now been rebuilt at Kystmuseet (The Coastal Museum) in Florø.
Owner: Sigrid Batalden. - Date: Ca. 1900. - Photographer: Ukjend.
Sigrid Batalden.
Ca. 1900.
Ukjend.