Engineer and pilot officer Torberg Haaland was one of two from Førde who lost their lives in the service of their country during the Second World War. He was buried in the churchyard in Førde on 11 August, 1945. Some time after this a memorial stone was erected on his grave.

Torberg Haaland is buried next to his parents in the churchyard in Førde. The grave is the only war grave in the municipality of Førde.

Torberg Haaland's grave is located a few yards from the south-eastern corner of the church. He is buried next to his parents, Sivert Haaland (1877-1935), principal of Mo jordbruksskule (school of agriculture and forestry) 1918-1935, and Gina (1877-1933). On his grave there is a cut granite stone with the inscription: PILOT OFFICER TORBERG HAALAND * ENGINEER * 4 October, 1915 * 2 July, 1945. Principal Lars Hustveit of Mo jordbruksskule took the initiative to have the memorial stone erected.

Biography in the book "Våre falne" (Our Fallen)

HAALAND, TORBERG, engineer and pilot officer, Oslo. Born on 4 October, 1915, in Førde, son of Sivert Haaland, born 1877 at Kyrkjebø, and Gina, née Relling, born 1877 at Norddal. Graduate engineer of N.T.H. (Norwegian University School of Engineering). Was employed with Norges Statsbaner (Norwegian State Railways). Went to England in the spring of 1941 on a fishing vessel and was trained as a fighter pilot in Toronto. Was a pilot instructor until 1944, then came to England, where he was in active service in a Mosquito squadron. During a flight over the south of Norway on 2 July, 1945 the airplane crashed into the sea and exploded. Buried in Førde. Mentioned in Teknisk ukeblad (magazine for technology)nr. 25, 11 October, 1945, and in Verdens Gang (daily newspaper) on 9 July of that year. 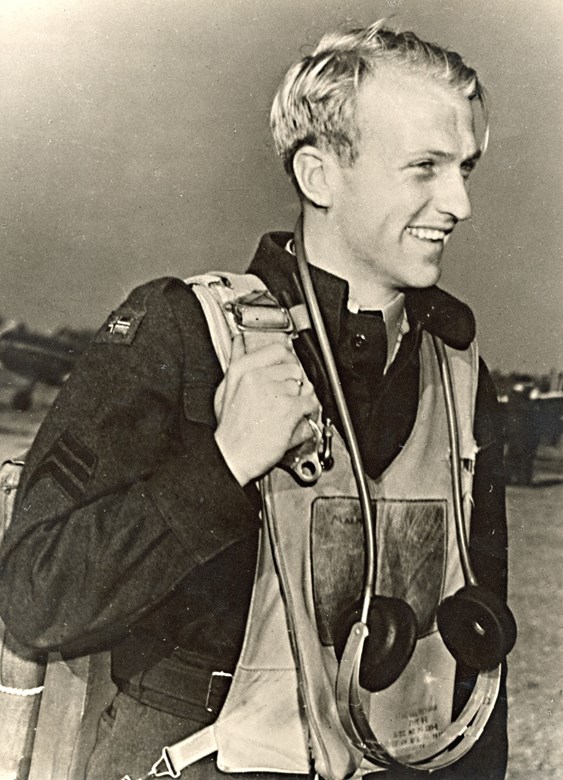 Wished to thank the people of Askvoll

Haaland got to Shetland and England with the assistance of people from Askvoll. During a flight along the Norwegian coast toward the end of the war, he found an opportunity to take a detour over Førde and Mo jordbruksskule, where he had been born and grew up. It was the last time he saw his place of birth.

At the burial of the urn at the churchyard in Førde on 11 August, his brother Aslak told those present that Torberg on many occasions had promised to visit Førde and Mo at his earliest convenience. His intention was to go to Askvoll to thank the people out there for the help they had given him in the spring of 1941.

Torberg Haaland was 29 years old when he and his crew perished on a mission. Their plane, a two-engine fighter bomber, crashed into the Larviksfjord near Stavern on 2 July, 1945. He was cremated in Oslo on Monday, 9 July, and buried from the church in Førde on 11 August. The local newspaper Firda wrote:

"The flags were at half-mast as the moving ceremony began. A great many people had come to show Torberg Haaland their gratitude and honour for his impressive contribution during the war. The chancel doorway was flanked by two large Norwegian flags, and in front of the altar rail the urn was on a small table, decorated with flowers. At the side two candles were burning, and two soldiers stood guard of honour. 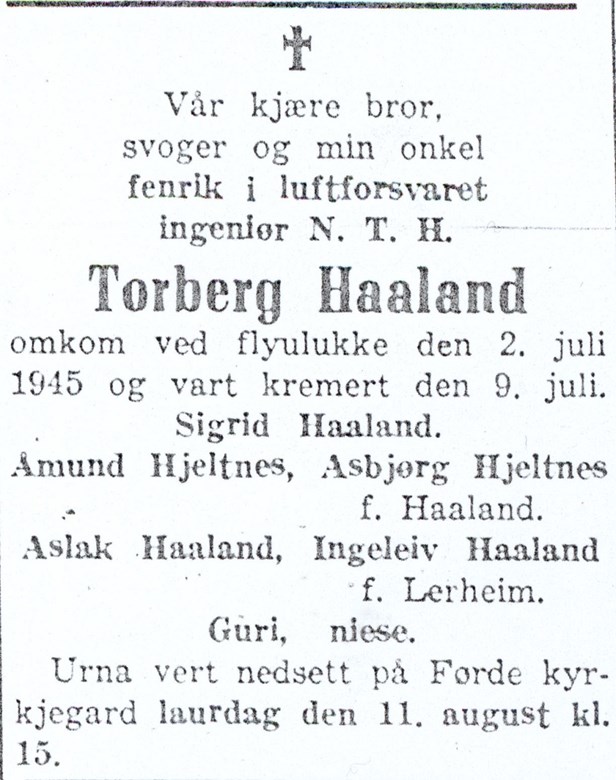 The vicar named Kvarstein officiated. In his sermon he pointed out that when the peace was won, it was because so many had volunteered to put their lives at risk in the struggle for freedom. One of them was Torberg Haaland. He was educated as a machine engineer and had a good and secure job, but when his country was in danger, he chose to do his part in defending it.

At the grave stood a military unit from 4th guards battalion. Several wreaths were laid: major Ese on behalf of the guards, principal Hustveit from Mo jordbruksskule, teacher Gjerland from the primary school Torberg went to, bailiff Schei from the Førde athletics club. At the conclusion of the ceremony his brother Aslak gave his thanks to the people and the community."

Announcement of the funeral in the local newspaper Firda on 8 August, 1945.

Torberg Haaland's brothers and sisters were grateful to the people who were present and followed their brother to his grave. Advertisement in Firda, 25 August, 1945.

On 28 March, 1946 the Norwegian Post Office had the memorial stamp Wings for Norway printed. Little Norway was the name of the training camp of the Norwegian Air Force in Canada during the Second World War. The camp was opened in November, 1940 near Toronto, and was in 1943 moved to Muskoka, approximately 110 kilometres north of Toronto. In the autumn of 1944 the training of pilots was moved to the air base Winkleigh in Devon, England.
resources:
Våre falne. Oslo 1948.
Bygdebladet Firda, fleire nummer, 1945. Førde.
Opplysningar frå:
Kyrkjeverja i Førde.
Aslak Haaland, 1361 Østerås.