Sunnfjord folkehøgskule (folk high school)at Førde in Naustdal was established in 1902. "Ungdomsskolen i Søndfjord" was the headline in an announcement in 1902. Thorbjørn Horten (1844-1927) has been called the school's father. He was born at Aurland, but lived his whole life as a grown-up in the region of Sunnfjord, from 1872 on the farm Staviki at Stavang. In 1929, he was honoured with a memorial stone. 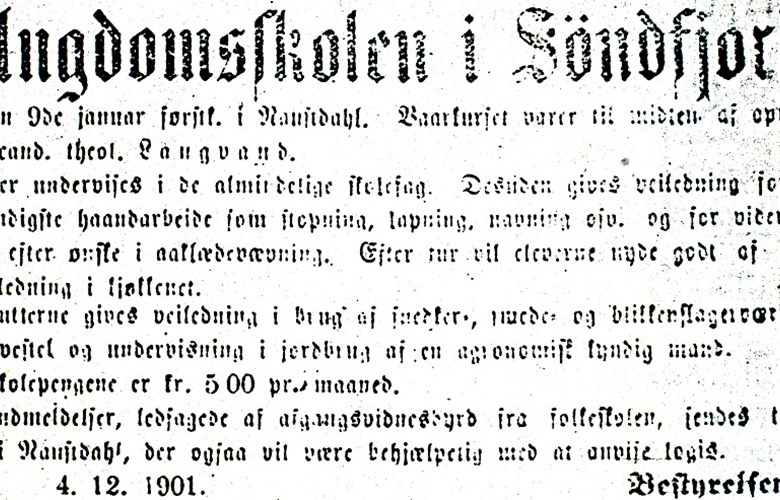 Late in the autumn of 1901, the school board of the newly established "Ungdomsskolen i Søndfjord" put announcements in a number of newspapers. They announced that the school was to start on 9 January 1902, that the theology candidate Langvand would be the headmaster, and information was given as to subjects and teaching. The tuition would be five kroner per month (Søndfjords Avis, 7 February 1902).

Memorial stone on his grave

The memorial stone commemorating Thorbjørn Horten stands on his grave at the Stavang church. The stone is about four metres high. At the top there is a carved cross and below a relief has been inserted. Under the relief is written: THORBJØRN * HORTEN * 26-2-1844 * 9-2-1927

At the back from top to bottom: ERECTED BY FRIENDS 1929 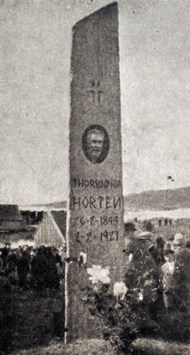 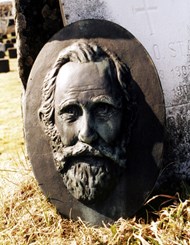 Born and raised at Aurland

Thorbjørn Horten was born on 26 February 1844 at Aurland. He grew up on the high farm of Horten about 500 metres above sea level, a farm that was deserted many decades ago. The farm is located on the east side of the Aurlandsfjord, practically facing the steep mountain of Beitelen where the Aurlandsfjord branches off. At an early age, Thorbjørn showed that he was a gifted child with a keen interest in learning. After his confirmation, he received help with his schoolwork and was able to try his hand as an assistant teacher and a substitute teacher.

Vicar Allum talked the shopkeeper at Aurlandsvangen into helping Thorbjørn Horten to attend a "teacher-apprentice course" with the teacher Nesheim in Luster. When Nesheim fell ill, his eight students were transferred to the teachers' training school at Balestrand. This happened in 1863, and this was the first class to graduate from "Balestrands lærerskole". The theology graduate Didrik Seip was the director of the school and he helped Horten in many ways. "He was won over to a conscious Christian life" according to a reference. During his time at the school from January 1863 to the summer of 1864, Thorbjørn Horten was also strongly influenced by the language issue and the temperance movement.

After graduating from the teachers' training school in the spring of 1864, he was for a short period acting assistant teacher with sexton Liljedahl at Leikanger. The same year he applied for a teacher's post in Sunnfjord, and was employed in the post to teach in the school districts of Rivedal, Straumsnes og Tyssedal in the municipality of Fjaler. (The name of the municipality was Ytre Holmedal in the years between 1837 and 1912). There he worked as a teacher for six years.

For a while, he lived in the home of the mayor O.M. Bakke from whom he also learned much. There he met his future wife, the eight-year-younger daughter Janikke O. Bakke. They married in 1872.

The idea of a religious school for young people

In 1871, Jens Rolfsen started a so-called folk high school at Dale. The school was closed after a short period, only three to four years. Thorbjørn Horten was highly interested in this type of school, and it was at this time that the idea of a school with a special Christian purpose for young people who had just been confirmed was awakened in earnest. Horten would be the first person in Norway to take up the work of this branch of the folk high school, in the schools that were called youth schools until the nine-year elementary school introduced in the 1960s "stole" this name. 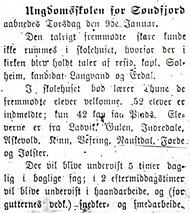 Sexton at the Bru church - to Stavang

In the autumn of 1871, Horten was employed as sexton at the Bru church, then located at Svanøy. He lived with the well-known member of the Haugianer lay movement Hans Christoffersen Svanø on the farm Erikstad. There the idea of a school for young people was further strengthened. When the church was moved to Stavang, the sexton also moved. After a while, he bought the farm Stavik where he lived for the rest of his life. At that time, he helped gifted young boys who were thinking of attending a teachers' training school.

At the age of 40, he fell ill, and in 1890, he had to end his teaching career, but remained active in other fields.

A man of many abilities and a hard-working man

Thorbjørn Horten had a wide range of interests. He was concerned with public health and knew the symptoms of the most common diseases. He learned pharmacy Latin and worked with medical recipes based on various types of plants and herbs. He wrote about the laymen Anders Haave and Erik Venjumshola, about food habits and the raising of children, as well as temperance and language issues. Only various articles and the book on Anders Haave were ever printed.

Above all, it was the youth school cause that he was most preoccupied with. At a meeting at Svanøy, Horten and A. Tyvold started to draw a work plan. They concluded that an association had to be established and a work committee had to be appointed. In 1892, the association "Ungdomsvennernes Forening" (Friends of youths) was established and from 1896, A.M. Erdal became chairman of the board. By and by local work associations were established, and from 1897, the association published a paper called "Ungdomsvennen" with Horten as its editor. The annual meeting in Florø in 1901 resolved to start up a youth school.

Now things started to move fast. On 9 January 1902, the school called "Ungdomsskolen i Søndfjord" was solemnly opened with a big meeting in the Naustdal church. It has been written that Thorbjørn Horten was so deeply moved and filled with such an intense joy in the church that he was unable to say a single word - the very man who in spoken and written words, year after year, had worked so hard to establish a Christian school for young people. His life's dream had come true.

In the first years, the school rented rooms at Naustdal, but in the summer of 1910, it moved into its own facilities in Førde. Thorbjørn Horten sat on the school board until 1918, and became later a lifetime honorary member.

Horten was now getting on in years. He had a relatively good health when he turned 80 in 1924, but then his strength became weaker. The pioneer could not attend the 25th anniversary of the school in January 1927. He died on 2 February 1927, and he was buried at the churchyard of Stavang. A large crowd followed him to his grave. 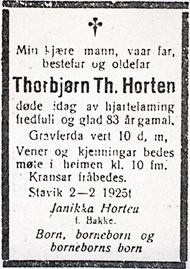 On 28 July 1929, an even bigger crowd gathered at the gravesite of Thorbjørn Horten. About 1000 persons had turned up to attend the unveiling ceremony of his memorial stone. The ceremony was started with a service where Matias Orheim said an opening prayer and the vicars Rolness and Steinsland officiated. The Ullaland choir sang several songs.

Matias Orheim gave the unveiling speech. - He started by referring to the last greeting he got from Horten, reported the paper Firda Folkeblad, - vizually, the words of the Lord: "Remain in me". After the unveiling speech, the Ullaland choir sang Orheim's hymn "Eg fann min gud i ungdomsvaar." (I found my God in the spring of my youth)

Nils Husetuft then handed over the stone to the Bru "sokn" council that had provided the site for the stone and promised to honour and take care of it. 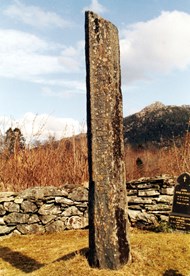 Thorbjørn Horten, relief on his memorial stone. Tor Grønnevik who attended the school himself made it, and it was cast at AS Luna (Ltd) in Bergen. When the picture was taken in the autumn of 2003, the relief was placed at the base of the stone.
Owner: Fylkesarkivet i Sogn og Fjordane. - Date: 2003. - Photographer: Hermund Kleppa.
Fylkesarkivet i Sogn og Fjordane.
2003.
Hermund Kleppa.

The newspaper Nordre Bergenhus Amtstidende in Florø ran only a short notice when "Ungdomsskolen for Søndfjord" was opened. It ran: .. opened Thursday on 9 January.
There was no room in the school house for the many people who had turned up, which is why the ceremony was held in the church where speeches were given by the curate Solheim, candidate Langvand and Erdal.
In the schoolhouse, teacher Tune wished the pupils welcome. 52 students had applied, but only 42 were admitted. The pupils come from Lavik, Gulen, Indredale, Askevold, Kinn, Vefring, Naustdal, Førde and Jølster.
There will be five lessons daily in theoretical subjects, and in the afternoon there will be two lessons in needlework and (for the boys) carpentry and metalwork.